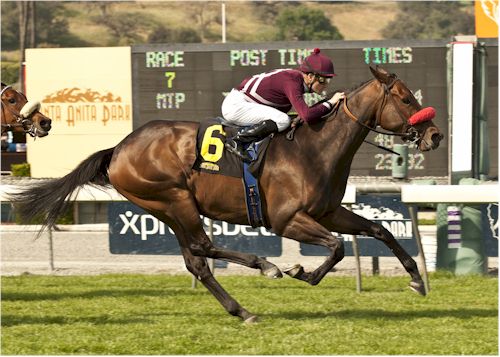 After winning three stakes for statebreds in the last 16 months, and finishing second or third in three graded stakes, Tiz Flirtatious won her first graded stakes in the $150,250 Santa Ana Stakes for fillies and mares on turf at Santa Anita.

Ridden by Julien Leparoux, Tiz Flirtatious ($6) won the Grade 2 Santa Ana Stakes by a length over even-money favorite Lady of Shamrock, who was making her 2013 debut. The second choice in the betting, Tiz Flirtatious ran 1 1/8 miles on turf in 1:46.62.

Leparoux had Tiz Flirtatious in fifth at the end of the backstretch, and rallied wide on the turn to reach contention with a furlong remaining. Tiz Flirtatious caught pacesetter Quiet Oasis in the final furlong and had enough of an advantage to hold off a late threat from Lady of Shamrock.

“On the backside, she relaxed,” Leparoux said. “I waited and waited and she had a nice kick.”

Lady of Shamrock broke slowly after striking the side of the gate and was last until the eighth pole. She caught Quiet Oasis in the final strides to be second by a neck. Quiet Oasis was followed by Long Face, A Jealous Woman, and Smarty B.

Lady of Shamrock won two Grade 1 stakes for 3-year-old fillies last year – the American Oaks and Del Mar Oaks. She was fifth in the Breeders’ Cup Filly and Mare Turf here last November. Jockey Mike Smith said that Lady of Shamrock responded to urging in the stretch, and will improve with the benefit of a start.

“I got away slow,” Smith said. “If she had a race under her belt, she might have been closer. It’s a long year and I think this mare will be good.”

“With a little luck, the Matriarch could have gone her way,” Jones said. “I think the extra time between races really helped her. Julien did a great job of getting her to settle.”