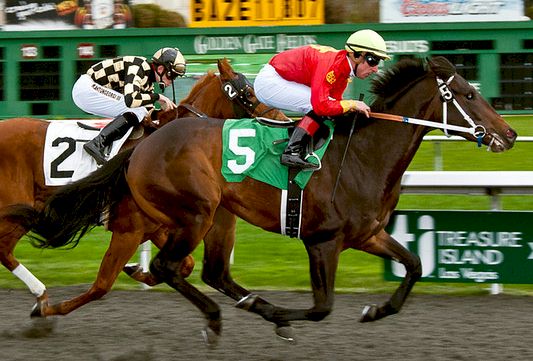 Nina’s Dragon isn’t in Kentucky yet and isn’t even nominated to the Triple Crown races.

But he is in Louisiana, where he will run in the 100th edition of the $1 million Louisiana Derby on Saturday at Fair Grounds.

Mason planned to have Nina’s Dragon in Kentucky last weekend, running in the Spiral Stakes on Turfway Park’s synthetic surface.

Two things caused Mason and owner-breeder Dave Currie to change their minds: Nina’s Dragon was only rated 12th among the runners nominated and wasn’t assured a spot in the field and travel costs were prohibitive.

So for one-third the travel costs, Nina’s Dragon is going to New Orleans for nearly twice the Spiral’s $550,000 purse.

Nina’s Dragon vanned from Golden Gate Fields to Southern California, catching a flight to New Orleans, where Taylor awaited him when he arrived. A one-mile gallop was planned and then jogging and schooling.

Mason is pretty conservative as trainers go, so when he makes a move like this – entering his first million-dollar race and running at Fair Grounds for the first time – there must be a pretty good reason.

Nina’s Dragon ran third in his debut June 24 in Pleasanton and won his maiden in his second start at Golden Gate Fields on Dec. 29.

He was third in a Feb. 1 allowance race at a mile at Golden Gate Field, and then Mason wheeled him back in the Grade 3 El Camino Real Derby on Feb. 16. He ran second to Dice Flavor, who will make his next start on Saturday in the $2 million UAE Derby in Dubai.

“I’ve never trained a horse that has the talent he has.”

“You don’t get many opportunities to run for a million” dollars, Mason said. “He’s bought and bred a lot of horses.

“We’ve researched it. A lot of longshots win races there.”

“He had the ‘it’ factor,” she said. “He looked great, but I’ve had a lot of good-looking horses that didn’t end up any good.

“What impressed me was his disposition and his mind. He was so sensible. Nothing shakes the colt up. Whatever you wanted him to do, he was agreeable. He was happy all the time.

“And when you got on, you could just feel the power. My wrangler and I, we’d fight to see who got on Dragon.”

Best of all, Nina’s Dragon, a son of Tizbud is still improving.

He may not exactly be bred in the purple, but he has a strong pedigree.

He also has three siblings with more than $128,000 in earnings – Lookn for the Lord, stakes-placed Just a Tizzy, sired by his sire’s sire, Cee’s Tizzy; and multiple stakes-placed Trish’s Diamond.