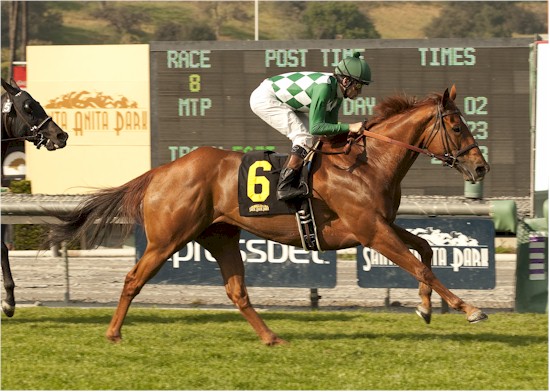 Idle since winning a first condition allowance down the hill on March 30, 2012, the 6-year-old Harris Farms homebred daughter of Benchmark sat third early and was 2 ½ lengths behind Ismene when she hit the dirt crossing at the top of the stretch.

“I liked the way she was training and I know she has some class to her, so we took a shot and got lucky…I’m really pleased,” said winning trainer Sean McCarthy, who picked up his first-ever Santa Anita stakes victory. “She just had some issues going on, aches and pains.

“There were no fractures, no chips, no surgery involved or anything, just a little wear and tear and we decided to give her a break…We ended up giving her about 120 days (off) and it worked out great.”

Off at 15-1 in the eight-horse Irish O’Brien (for older fillies and mares bred in California), Bench Glory got a perfect trip under Blanc, who had ridden her in all nine of her previous starts.

“She did great,” said Blanc, a well-liked native of Lyon, France. “First time out after a long layoff like this, you never know. She liked the course and was ready today. She’s super-special. She put me in the race like she always does and came with that strong kick. I can’t drink beer, so I guess I’ll have some Irish champagne!”

“It’s always a tough deal in today’s world but you want to give every horse every opportunity,” said Harris. “We thought we could stop on her and breed her but then we thought we’d bring her back and if she goes alright we’ll keep her going. She did, and it turned out.”

Tiz Flirtatious Gets Her Grade
Scroll to top