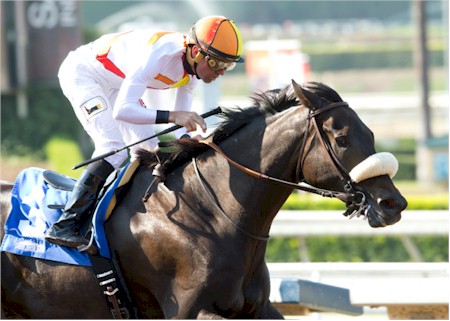 SantaAnita.com
ARCADIA, Calif. (June 26, 2016)–In his 45th career start, venerable 8-year-old gelding Soi Phet rolled to the lead into the Club House turn and dictated terms throughout as he took Sunday’s $75,000 McCann’s Mojave Handicap by 2 ½ lengths while covering a mile and a sixteenth in 1:40.80–thus turning the tables on runner-up Avanti Bello, who defeated him by a nose in the one mile Tiznow Stakes here May 28.

Called upon by Desormeaux with three sixteenths of a mile to run, Soi Phet responded eagerly and left Avanti Bello in his wake with a furlong to run.

“The half in 46 and change is pretty much his natural cruising speed, so if he can do it well within himself, I’ll take it,” said Desormeaux, who had piloted Soi Phet to three consecutive second place finishes. “This horse is a pleasure to ride, he knows what he’s doing out there.”

As to what might be in store for his resident senior citizen, Powell said, “There’s some grass racing down at Del Mar for Cal-breds, but he’s eight years old now, so we’ll see how he comes out of this. Every year, if you look back, he does really well in the summer. This year, I won’t run him at all in the winter, just summer and early fall.”

El Huerfano, who was ridden by Flavien Prat, loomed menacingly while three-wide around the far turn, but backed up readily when he straightened for home and finished three quarters of a length in front of Songforjohnmichael. Off at 7-2, El Huerfano paid $2.40 to show.