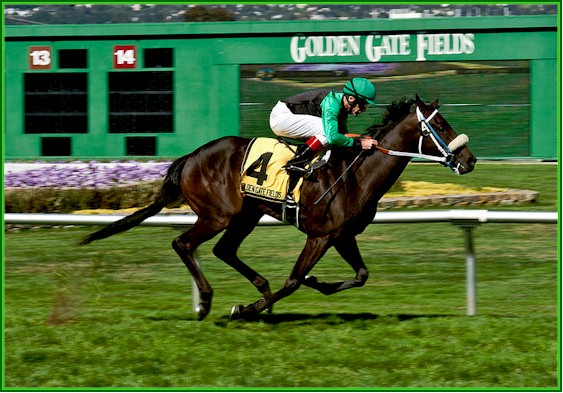 Best Present Ever recorded her third straight victory on turf Saturday when she humbled five opponents in the $100,000 Campanile Stakes at Golden Gate Fields.

Ridden by Russell Baze and trained by Eric Kruljac, Best Present Ever came from just off the pace to win the one-mile grass race for California-bred 3-year-old fillies by five lengths. Oh Molly Brannigan, who set the pace under jockey Juan Hernandez, took second by 2 1/2 lengths over Warren’s Amber.

Best Present Ever broke her maiden racing “about 6 1/2 furlongs” down the hillside turf course at Santa Anita on March 31 and then came back to win a 1 1/16-mile allowance race on the turf at Hollywood Park on April 29. She completed her turf hat trick with her dominating win in the Campanile.

“What a nice filly,” said Baze of Best Present Ever. “She’s pretty much push-button. I watched her last two races and she was very impressive. She sits and waits for you to ask her, and when you do, she cuts and runs. She did everything I asked her to do.”

In the Campanile, Baze had Best Present Ever stalk the leaders from third while racing along the rail. The only question was whether Baze would be able to find some racing room for Best Present Ever, who was full of run on the far turn. Baze spotted daylight when Oh Molly Brannigan left the rail open at the top of the stretch, and Best Present Ever never hesitated when Baze asked her to charge up the fence.

“All I had to do was wait for the hole to open,” said Baze. “I was pretty confident the leader would drift out. She’s fearless and went right on through. For attending that kind of pace, that was a good turn of foot she showed today. It was an impressive effort.”

“She was born on Feb. 17, which is my birthday, so that’s how we named her,” said Norine Grenier. “She lollygags until it’s time to go and she goes.”

Best Present Ever is by Unusual Heat and out of the mare Centerofattention.

“We bought her mother at the Del Mar Select Yearling Sale in 1999, and she won a stakes at Santa Rosa (the 2003 Luther Burbank) and the (2003) Solana Beach Handicap at Del Mar,” said Dennis Grenier. “We absolutely love the mother, and we bred her to Unusual Heat because he was the hot stallion a couple of years ago.”

Dennis Grenier said Kruljac will decide what is next for Best Present Ever.

“Next race depends on how much time the trainer wants to give her off. We may wait until Del Mar opens.”