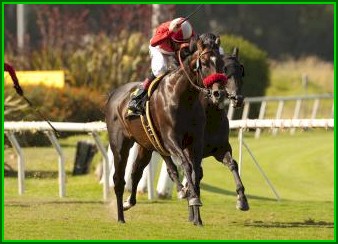 Acclamation took his customary position at the front of the field, repelled a brief challenge from Slim Shadey in early stretch and won by a length. Acclamation won his sixth consecutive race, all stakes, in the Grade 1 Whittingham. The streak began in May, 2011.

Valenzuela has been aboard for the last three of those races, a span that includes the $1 million Pacific Classic at Del Mar last August and the Clement Hirsch Turf Championship last October. He has now won the last three runnings of the Whittingham.

Valenzuela, 49, had not ridden since May 19 after fighting weight problems. The mount on Acclamation was his only ride on Saturday.

Valenzuela rode Acclamation with confidence. Acclamation led by as many as 2 1/2 lengths on the backstretch, setting a slow pace of 24.89 and 49.68 seconds through the first half-mile.

“I had plenty of horse all the way around,” Valenzuela said. “He picked it up nicely and he gave it all he had.”

The win was a boost for trainer Don Warren. He was hospitalized last month after a heart attack.

Acclamation ($4) ran 1 1/4 miles on turf in 2:01.50. Slim Shadey, second in the Woodford Reserve Turf Classic at Churchill Downs on May 5, closed from third to race within 1 1/2 lengths of the leader in early stretch. He never got within a length.

“He’s a good horse to peg back on the front,” said Simon Callaghan, who trains Slim Shadey. “We ran a good race.”

Utopian, the winner of the Grade 3 Inglewood Handicap on April 27, finished third, followed by Juniper Pass and Barney Rebel. Make Music for Me was scratched on Saturday morning.

Acclamation, a California-bred by Unusual Heat, was entered for the Inglewood, but did not start after Warren said he was unhappy with the horse’s condition the day before the race. Subsequent tests revealed no abnormalities.

John Scott getting his second act
Scroll to top