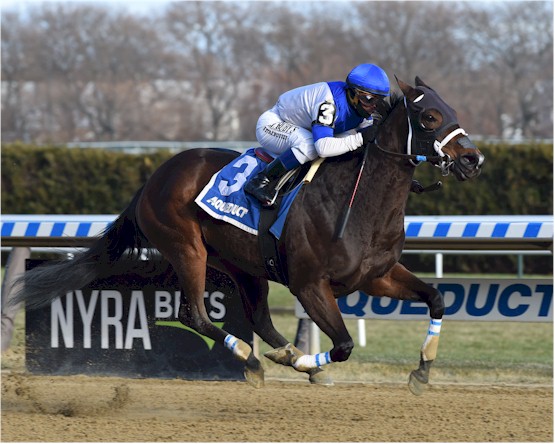 By DRF.com OZONE PARK, N.Y. (Dec. 7, 2019) – The connections of Spiced Perfection were torn whether to put the multiple Grade 1 winner through the ring at the Keeneland November sale last month. When the filly failed to meet her reserve – the bidding stopped at $1.35 million – owners Adam Wachtel and Peter Deutsch and partners were not overly disappointed.

“I’m not unhappy that we didn’t sell her, let’s put it that way,” Wachtel said.

Wachtel spoke Saturday from the Aqueduct winner’s circle after Spiced Perfection cruised to a front-running, 2 1/4-length victory in the Grade 3, $250,000 Go for Wand Handicap. Saguaro Row finished second, 1 1/4 lengths clear of Our Super Nova. Need Supervision, Another Broad, and Espresso Shot completed the order of finish as the field basically ran positions unchanged from start to finish.

In a race void of speed, Javier Castellano put Spiced Perfection on the lead soon after the start. Going into the wind at Aqueduct, Spiced Perfection maintained a measured advantage over Saguaro Row through posted fractions of 24.74 seconds for the quarter, 49.09 for the half, and 1:14.03 for six furlongs. Turning for home, Castellano had more than enough horse to finish the job, getting to the wire well clear of Saguaro Row.

Spiced Perfection, a 4-year-old California-bred daughter of Smiling Tiger, covered the one mile in 1:39.11 and returned $4.80 as the 7-5 favorite.

Castellano said he spoke with trainer Peter Miller about trying to nurse his filly’s speed on the lead in an attempt to get the mile, a distance at which she had not previously won.

“We took advantage today, there was no speed in the race, to dictate the pace, set slow fractions and that was the key to win the race,” Castellano said. “She did it very easy the first part of the race and we were able to let her finish.”

Spiced Perfection improved her record to nine wins from 20 starts and increased her career earnings to $1,214,405. The Go for Wand was her sixth stakes victory. Spiced Perfection won the Grade 1 La Brea last December at Santa Anita and the Grade 1 Madison in April at Keeneland.

Spiced Perfection was coming out of a fourth-place finish in the Breeders’ Cup Filly and Mare Sprint. She went into that race having missed some time due to a foot injury sustained in her victory in the Thoroughbred Club of America at Keeneland in October.

Wachtel and Deutsch both said the plan for 2020 would be to get Spiced Perfection to Keeneland for next year’s Breeders’ Cup.

In the interim, Spiced Perfection would return to Miller’s barn in Southern California, though she could come back East in February for the Barbara Fritchie Handicap at Laurel, a race in which she finished second earlier this year.