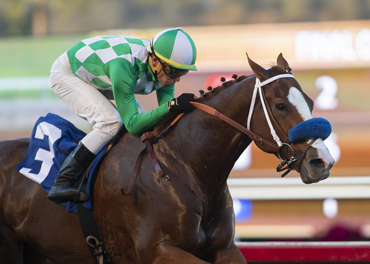 Always prominent under regular pilot Tiago Pereira, Fashionably Fast took the lead in upper stretch and prevailed gamely in 1:22.13 for the seven furlongs. Oliver, the lone three-year-old in a field of five older California-bred runners, was a clear second, a length and one-half ahead of third-place Ultimate Bango, with Grinning Tiger fourth and longshot Shades of Victory fifth and last. Withdrawn from the sprint was Rick’s Dream.

Fashionably Fast, a four-year-old gelded son of Lucky Pulpit, was bred by the Harris Farms of John Harris who co-owns the horse with partners Per Antonsen and Paul Nicoletti. Dean Pederson is the trainer.

Fashionably Fast was a two-time winner last summer at Del Mar and in October won the Harris Farms Stakes at the Fresno Fair.

There were no perfect tickets in the Pick Six Sunday, so a carryover of $51,254 will be in effect when racing resumes Friday with a first post of 12:30 p.m.

TIAGO PEREIRA (Fashionably Fast, winner) – “I thought I’d be laying about third. I thought the 5 (Oliver) would go. But we came out of there really well and he’s plenty fast and he went to the front. Then he was running so easy I wasn’t going to take him back. I just let him go. I know this horse (he’s ridden him in nine of his last 10 starts) and I know how good he can be. Four in a row. That’s good.”

DEAN PEDERSON (Fashionably Fast, winner) – “Him maturing quite a bit has played a big roll (in his four straight wins), and obviously taking the blinkers off has helped. It helps him feel a little more relaxed in his running style. He’s a handy horse you can place where you want to and he has been a godsend to us. He has been a remarkable horse over a short period of time for us.”

The stakes win was the first of the meet for rider Pereira and his first in the Cary Grant. He now has six stakes wins at Del Mar.

The stakes win was the first ever at Del Mar for trainer Pederson.

The winning owners are John Harris of Sanger, CA, and Per Antonsen and Paul Nicoletti. Harris also bred the winner.