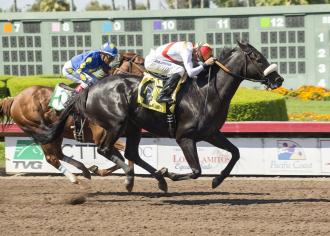 By Steve Andersen
Cypress, CA (September 9, 2017)-Soi Phet beat a field of runners who were mostly half his age in Saturday’s $75,000 E.B. Johnston Stakes for California-bred milers at Los Alamitos.

Winning a stakes at the Orange County track has become an annual occurrence in recent years for the 9-year-old Soi Phet. The Johnston was the fourth career stakes win for Soi Phet and third at Los Alamitos. He won the $200,000 Los Alamitos Mile in 2014 and the Johnston Stakes last year.

The disappointment in the field was Gold Rush Dancer, the even-money favorite who finished last of six after racing as close as fourth on the turn.

Soi Phet was ridden by Kent Desormeaux and was always in the first three. Soi Phet led briefly on the backstretch, and was third by a half-length to Start a Runnin with a quarter-mile remaining in the long stretch. Soi Phet led by a head over He Will with a furlong to go.

The 5-year-old He Will finished 1 1/2 lengths in front of 6-year-old El Huerfano. Start a Runnin, a 4-year-old, was fourth, followed by the 6-year-old Lucky J Lane and 4-year-old Gold Rush Dancer.

Trainer Vann Belvoir was left puzzled by Gold Rush Dancer’s loss after talking with jockey Evin Roman. Gold Rush Dancer was fourth on the backstretch but was never a factor in the stretch.

“He ran flat,” Belvoir said. “He had him in a good position. You could see he wasn’t comfortable.”

Soi Phet has won 2 of 5 starts this year. He won an optional claimer in which he was eligible to be claimed for $62,500 at Santa Anita in May in his first start of the year.

“To have him win two races this year and a stakes is a big relief,” Powell said.

Powell said in the winner’s circle that Soi Phet could have one more start at the Santa Anita autumn meeting that begins on Sept. 29 before being given a rest. There are plans for a 10-year-old season in 2018.