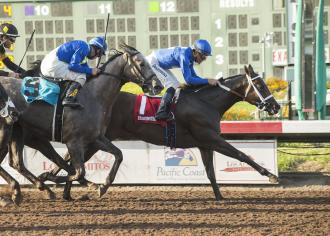 Overcoming trouble at the start and traffic trouble along the way, Ismelucky, a 2-year-old Lucky Pulpit filly out of the Tribal Rule mare Ismene, rallied along the rail to overtake 14-1 shot Shaken Memories near the wire.

Bred by Stephen Ferraro and owned by trainer Jeff Bonde and Jerome Russell, Ismelucky completed the 6 ½ furlongs in 1:17.84. The win was her second in three starts and increased her earnings to $108,420.

The Debutante was the first race for Ismelucky since she defeated maidens by 2 ½ lengths May 18 at Santa Anita.

“We backed off on her after she won because I thought she was a nice filly and she had some tightness in her hind end,’’ said Bonde. “We cranked her up again to get her ready for this race.”

Bonde was pleased with how Ismelucky had trained leading into Saturday, but was apprehensive when she drew the rail in the field of nine. His fears were founded given what happened at the start and along the way.

“It was an eventful trip to say the least,’’ said jockey Kent Desormeaux, whose other stakes win at the LACF meet came with Soi Phet in the E.B. Johnston Stakes hours before he won the Beverly Lewis with Princess Karen.

“We got slammed at the start by (eventual eighth-place finisher Funny Bean, who broke directly outside Ismelucky), then we had to wait for room, and then in the stretch, (Shaken Memories) was using her tail like a fan in front of us. This filly really showed me something today.’’