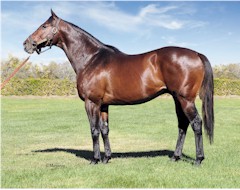 John Harris commented, “I am delighted to add this nice stallion to our stallion roster. He combines several attributes that I admire – won both short and long on both synthetic and turf, very durable, has a pedigree that has many great horses, won several graded stakes and had miler form. Plus he is good looking and has a nice disposition.” Mike Pender, who trained Jeranimo, stated: “He was bold and the alpha male of the shed row, with no breaks in training during his six-year career. He was the smartest, most intelligent horse I’ve ever had on my shed row.”

Wade Jacobsen of the Jeranimo Partnership commented, “Jeranimo retired sound and is a throwback to sturdy horses of years ago. He was electrifyingly fast and his soundness, versatility and longevity are great assets to any breeding program. We are pleased to stand Jeranimo at Harris Farms, California’s premier breeding facility.”

Owned by the Jeranimo Partnership, Jeranimo will stand for a fee of $2,500 live foal guarantee. Inquiries to Dave McGlothlin at davem@harrisfarms.com, 800-311-6211 or www.harrisfarms.com.