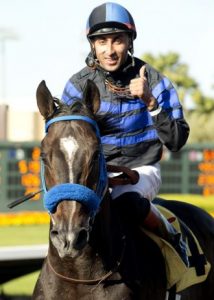 The milestone was in jeopardy in deep stretch of the Bertrando Stakes at a mile. Boozer ($8) led by 1 1/2 lengths with a furlong to go, and was challenged in the final furlong by 3-2 favorite Soi Phet.

“I thought that horse was going to run by me,” Maldonado said. “My horse saw the other horse coming and he fought back.”

Maldonado had Boozer in second for the first six furlongs, tracking pacesetter Avanti Bello, who set fractions of 22.76 seconds for the opening quarter-mile and 46.39 for a half-mile. Boozer took the lead early in the 1,380-foot stretch. He finished a mile in 1:34.73, winning by a half-length over Soi Phet.

Boozer, a 6-year-old gelding by Unusual Heat, races for Al and Sandee Kirkwood and trainer Mark Glatt. The Bertrando Stakes was Boozer’s second start on the main track in his 22nd outing. Boozer was fifth in an optional claimer on the main track at Santa Anita in January. He later won the Sensational Star Stakes for California-breds on the hillside turf course at Santa Anita in February, and was second in an optional claimer against open company on turf there on March 20.