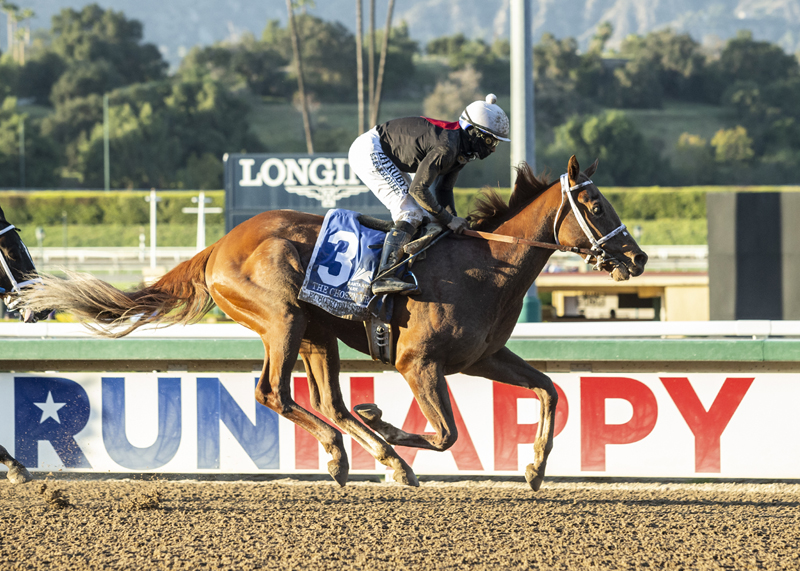 Courtesy of Santa Anita ARCADIA, Calif. (April 3, 2021)–Classy The Chosen Vron sat a perfect trip and rallied to win Saturday’s $150,000 Echo Eddie Stakes at Santa Anita by 1 ¼ lengths under Mike Smith. Trained and owned in-part by Eric Kruljac, the chestnut gelding by Vronsky got 6 ½ furlongs in 1:15.80.

Ridden confidently, The Chosen Vron was fourth, about four lengths off speedy Letsgetlucky mid-way around the turn when he made an eye-catching move at the rail enabling him to pounce on both eventual runner-up Good With People and the pacesetter with three sixteenths of a mile to run.

Although he won comfortably, Good With People seemed to find another gear but The Chosen Vron reeled him in leaving the sixteenth pole in a very professional effort.

“That is a nice colt there,” said Smith, who’s been on more than a few in a Hall of Fame career. “He’s got a good head on his shoulders. He came from off the pace to win. There was a big speed bias today and I think he was the only one to come from off the pace. I think this colt can go further and run against open horses. When I asked him, he took dead aim and cruised right past them. This horse has a lot of class. I really like him.”

An ultra-impressive first time maiden winner versus statebreds here on Dec. 27, The Chosen Vron was subsequently third with Smith aboard in the Grade II San Vicente Stakes on Feb. 6. Off as the heavy favorite today at 3-5 among a field of nine California-bred sophomores, The Chosen Vron paid $3.20, $2.60 and $2.10.

“Considering the way the race went and him not really breaking, you just don’t know that a young horse will take the dirt in their face and he got a ton of it,” said Kruljac, who was doubly elated due to the fact his son Ian trained the winner of the previous race, making for a 12-3 Kruljac Daily Double that paid $47.00. “It’s nice to have someone like Mike on the back of your horse, because he can go to Plan B in an instant. My son won in the 11th race today, so it was a great day for the Kruljacs!”

Owned by Eric Kruljac, Robert Fetkin, John Sondereker and Richard Thornburgh, The Chosen Vron is out of the Tiz Wonderful mare Tiz Molly. With the Echo Eddie win, The Chosen Vron picked up $90,000, increasing his earnings to $150,600.

The Echo Eddie, for 3-year-olds bred or sired in the state of California, is part of the lucrative Golden State Series, which is sponsored by the CTBA.