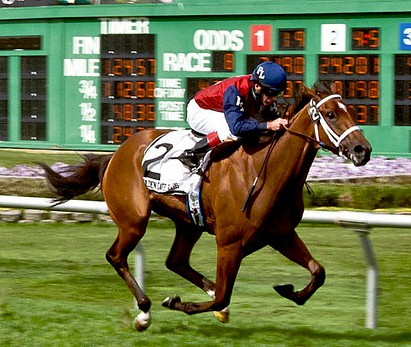 Unusual Way broke nicely and let Adriatic Skye set the early pace, but as the field moved onto the backstretch, Unusual Way edged to the front on her own along the rail. She set an even pace of 48.36 seconds 1:12.69 while relaxing on the front end.

“This is a very nice filly, and I was lucky to get a nice, clean trip,” winning jockey Russell Baze said. “One thing about her is she doesn’t mind going right up there on the fence. She was in control the whole way.”

Life Is a Stone moved up at the quarter pole, but Baze shook the reins at Unusual Way, who rebroke and opened up, gliding to the wire under a hand ride.

“When [Life Is a Stone] came up to her on the far turn, she just moved away from her,” Baze said. “She could have won by more, but she was kind of gawking down the lane.”

The multiple stakes winner was not seriously challenged as Qiaona closed for second, two lengths in front of Life Is a Stone. Winning time was 1:36.81.

“This was the first time it made sense to run the filly on the grass,” winning trainer Jeff Bonde said. “We were hoping with a new surface, she wouldn’t rush off and be a Type A. She did that until the backstretch and just outclassed the other filly [Adriatic Skye]. Look out Del Mar Oaks.”

Unusual Way, a daughter of California’s top turf sire, Unusual Heat, earned $60,000 for her third stakes victory and fourth career win in 10 starts. The $65,000 yearling purchase for Edward Brown Jr. and Phil Lebherz has earned $372,110 in her career.