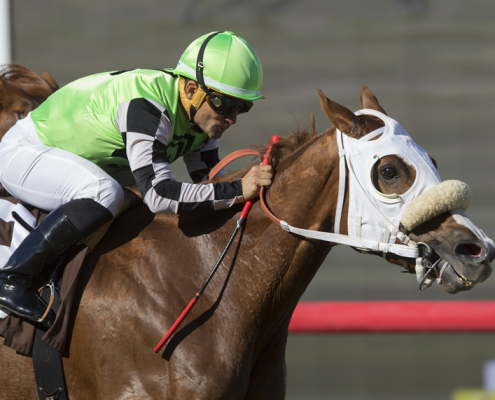 by DMTC.com
Masterfully-ridden by jockey Corey Nakatani, longshot How Unusual spurted between horses at the top of the stretch to enter contention and outfinished 2-1 favored Responsibleforlove in the final sixteenth to win the featured Grade III $100,000 Red Carpet Handicap on Thanksgiving holiday Thursday at Del Mar.

How Unusual, a daughter of Unusual Heat, sent to the gate at 9-1 for the mile and three-eighths grass marathon, was outrun in the early stages, but showed an impressive turn of foot when cut loose by Nakatani to score by a half-length in 2:14.92 for the distance.

Responsibleforlove, with Joe Talamo in the saddle, was runner-up, a half-length in front of Laseen, with La Manta Gris fourth in the field of 12 older fillies and mares. Galileo’s Song and Lottie were withdrawn from the original field.

Jockey Corey Nakatani said, “Mike (trainer Mike Pender) and I talked and we both agreed that there was only one way to go with her: to take her back, get her to settle and into a nice rhythm and then make that late run. I thought sure she’d handle the distance and she did. She’s a nice filly.”