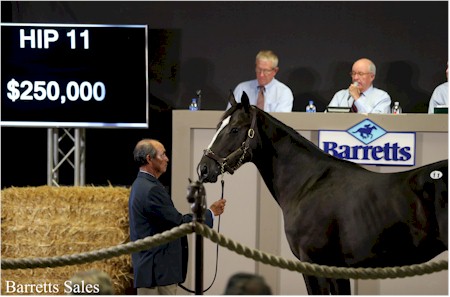 Jay Em Ess Stable secured the sale-topper at the Barretts Select Yearling Sale for a second straight year, going to $250,000 for hip 11, an Unusual Heat colt.

The dark bay or brown colt is out of the winning Capote mare Cinema Paradisa, who is the dam of five winners, including stakes-placed Moving Desert and Sambamzajammin. The California-bred is from the family of stakes winners Johnny Whip, Bonnie and Gay, Lady Offshore, and La Noticia.

Harris Farms, the operation that stood Unusual Heat at stud, consigned the sale-topper. Unusual Heat was euthanized in May 2017 due to complications from laminitis.