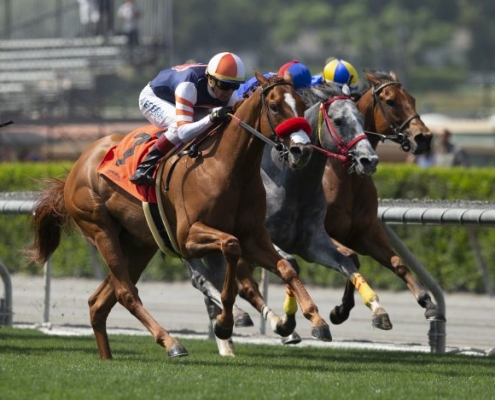 ARCADIA, Calif. (April 27, 2019)–A newcomer to stakes company, The Hunted got a perfect stalking trip under Tiago Pereira and accelerated powerfully turning for home to take Saturday’s $100,000 Crystal Water Stakes by one length. Trained by Richard Baltas, the 4-year-old California-bred gelding by Unusual Heat got a flat mile on turf in 1:35.07.

Named for the winner of both the 1977 Santa Anita Handicap and Hollywood Gold Cup, the Crystal Water, for 3-year-olds and up, is part of the lucrative Golden State Series, sponsored by the CTBA, and is for California-bred or sired runners.

Ridden for the first time by Pereira, The Hunted, who broke from the far outside, saved ground while a close fourth into the Club House turn and was fourth, about 2 ½ lengths off of pacesetter Tule Fog heading into the far turn. Approaching the quarter pole, Pereira stepped on the gas and The Hunted wheeled three-deep turning for home en route to an impressive win.

“I worked him the other day and he worked really good,” said Pereira. “I’ve never ridden him in a race, but I looked at his last two races and it looked like he was running against good horses. Today, the pace seemed good for him and he was comfortable. When I pushed him out at the quarter pole, he took off.”

Bred in California by CHRB commissioner Madeline Auerbach and owned by Madeline Auerbach, LLC, Ciaglia Racing, LLC and Little Red Feather Racing, The Hunted bagged his third win from 10 career starts and with the winner’s share of $60,000, increased his earnings to $155,829.

“The horse has been training good,” said Baltas. “He was a little unlucky, he was too far back last time. This is stakes company, against Cal-breds…It was a good race and a great ride. I’m very happy for all the connections. He was nice and relaxed down the backside.”

Ridden by Brice Blanc, Tule Fog was courageous in defeat, as he made all the early running and prevailed by a neck over favored Brandothebartender for the place. Off at 7-1, Tule Fog paid $5.60 and $3.80.

Ridden by Joe Talamo, Brandothebartender was fifth heading into the far turn and didn’t have any apparent excuses, as he finished third by a half length over Hardboot. Off at 2-1, “Brando” paid $2.40 to show.