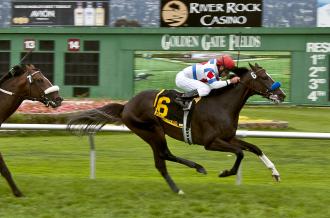 Coming off a win in the $300,000 Snow Chief at Betfair Hollywood Park, Surfcup (Unusual Heat) won his second straight stakes for 3-year-old California-breds. He covered a mile on the Lakeside Turf Course in 1:37.54 to defeat the comebacking Gervinho by a length.

Surfcup broke well and took the lead immediately. He rated nicely under Russell Baze even though Heat Streaker stayed within a head of him on his inside. The fractions were reasonable at 24.60 seconds and 49.06 through the opening half-mile, with Surfcup finally inching a length in front at the quarter pole.

He got more breathing room early in the stretch, and Gervinho tried to rally but could make no real impact.

Gervinho (Unusual Heat) was making his first start since a fifth-place finish in the Breeders’ Cup Juvenile Turf in November. Prior to that race, he won the $100,000 Suma Beach on turf.

Tebows Big Play, who had just graduated in his turf debut, was third, another 2 1/4 lengths back.

Surfcup’s trainer, Bob Baffert, said before the race that it “seems like a good spot,” but he noted that he had seen favorites like Manando in this year’s El Camino Real Derby going back to 1998 Kentucky Derby winner Real Quiet fizzle at Golden Gate.

“As advertised, he was the best horse in there,” Baze said. “Bob sent the horse up ready, and all I had to do was be a good passenger. He was very relaxed. I never had any concerns.”

Surfcup, a Donald Dizney homebred by Unusual Heat, earned $60,000 for his fourth victory in seven starts and increased his career earnings to $335,800.