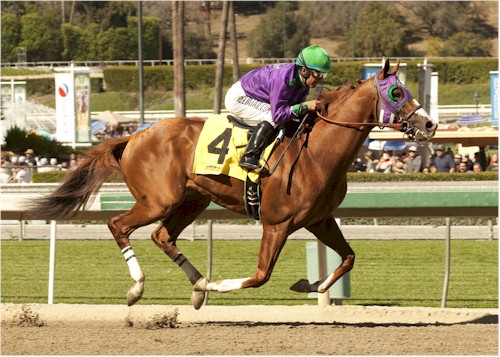 A chestnut colt by Lucky Pulpit, California Chrome has become the talk of the racing world since going gate to wire in the Grade II, 1 1/16 miles San Felipe Stakes on March 8, winning by 7 ¼ lengths under Victor Espinoza.

A winner of his last three races, all stakes, by a combined 19 lengths, California Chrome, with Espinoza up, worked a half mile at his Los Alamitos base on Saturday in 46.40 and galloped out six furlongs in 1:13.40.

“He looked sharp and he galloped out strong,” said Sherman on Saturday.  “All systems are go.  His work was super, I was very impressed.  I’ll get him over there (Santa Anita), school him in the gate, go through the paddock and then we’ll be ready to go…I know there’s always a question until they’ve done it, but I really think this horse will go a mile and a quarter, no problem.  He’s doing everything right and we’re looking forward to running him in the Santa Anita Derby.”

wins and a second from nine starts and has earnings of $534,850.  Bred in California by his owners, Steve Coburn and Perry Martin, he’s out of a Maryland-bred mare named Love the Chase, who had one win—a maiden $8,000 claiming triumph at Golden Gate Fields–from six starts and made $7,020.“When these guys first sent me the horse, they said ‘Here’s your Derby horse,” said Sherman.  “He’s always been a great looking horse, but it really seemed like the ‘light bulb’ went on for him in the Cal Cup (Derby, which he won by 5 ½ lengths on Jan. 25).  He’s much more focused now and he loves to train.  It’s pretty exciting.”

In an age when Kentucky Derby prospects are sold readily, Coburn and Martin have thus far issued an emphatic “No” to the trend.

A half length winner of the Grade II, 1 1/16 miles Robert B. Lewis Stakes Feb. 8, the John Sadler-trained Candy Boy was flattered this past Saturday when Lewis runner-up Chitu came back to win the Grade III Sunland Derby.

A Kentucky-bred colt by Candy Ride, Candy Boy was second two starts back to eventual Eclipse Champion 2-year-old colt Shared Belief in the Grade I CashCall Futurity on Dec. 14 and earned a career best 96 Beyer Speed figure in winning the Lewis.  Owned by his breeders, Lee and Susan Searing, Candy Boy can stalk the pace or run from off of it with Gary Stevens, who seeks a record 10th win in the West Coast’s most prestigious Kentucky Derby prep.

With two wins and two seconds from six starts, Candy Boy has earnings of $305,600.

Bob Baffert will seek a record seventh Santa Anita Derby win with Hoppertunity, who defeated top Kentucky Derby prospect Tapiture by a half length over a wet fast track in the Grade II, 1 1/16 miles Rebel Stakes at Oaklawn Park March 15.  A lightly raced colt by Any Given Saturday, Hoppertunity broke his maiden going a mile three starts back at Santa Anita on Jan. 30 and earned a career best 100 Beyer in taking the Rebel.

Owned by Mike Pegram, Karl Watson and Paul Weitman, has two wins from four starts, and layed close to the pace when winning on both occasions.  He has earnings of $410,720.

A first-out maiden winner going a flat mile on synthetic polytrack at Del Mar Aug. 31, Schoolofhardrocks is a highly regarded colt by Rock Hard Ten who is trained by David Hofmans.  Although he was beaten 15 lengths by California Chrome, he could benefit from his fourth place finish in the San Felipe, as it was his first start since winning at Del Mar.

Schoolofhardrocks broke his maiden from far back and would hope to benefit from a lively pace duel.  He was bred in Kentucky by Mrs. Jerry Amerman and is owned by Amerman Racing, LLC.

Halo Farms homebred Big Tire comes off a game nose maiden win going a flat mile on March 7 and will be making his seventh career start in the Derby.  A Kentucky-bred colt by Candy Ride, he’s trained by Mark Glatt, who has saddled 12 winners at the current meet.  Big Tire earned a career best 87 Beyer figure in the maiden win and he’ll be routing for the sixth time.

Friendswith K Mill was a much improved second in a 1 1/16 miles allowance on March 16 and trainer Doug O’Neill is hoping to catch lightning in a bottle and score a Santa Anita Derby three-peat, as he won last year with Goldencents and in 2012 with I’ll Have Another.  A Kentucky-bred colt by the Holy Bull stallion Flashy Bull, Friendswith K Mill broke his maiden for a $75,000 claiming tag going a mile on turf Feb. 7.  Owned by Neil Haymes, Dave Kenney and Wonderland Racing Stables, he has a win and a second from five starts.

Beaten a nose by Big Tire two starts back and second in four out of his five starts, Rprettyboyfloyd is still a maiden and will be routing for the third consecutive time for trainer Denise Breuer.  A Kentucky-bred ridgling by Bluegrass Cat, he has a stalking style and will hope to be in a contending position turning for home.  He’s owned by Karl Pergola.

Third, beaten a head by Big Tire and Rprettyboyfloyd last out, Dublin Up is another maiden testing the deep waters of the Santa Anita Derby.  Trained by Peter Miller, who is currently fourth in the trainer standings with 20 wins, Dublin Up debuted Nov. 30 at Churchill Downs and appears on the improve for Miller, whose owners, Donegal Racing, acquired him following his run at Churchill.

A Kentucky-bred colt by Unbridled’s Song, Dublin Up was sent to the lead and just missed in his last start and will likely be close to the pace in the Derby when ridden for the first time by Kent Desormeaux.  Dublin Up has two third place finishes from four starts.

There will be a special early first post time on Saturday of 12 noon.  Admission gates will open at 10 a.m.  Approximate post time for the Santa Anita Derby, which will be shown on NBC Sports Network, is 3:42 p.m.