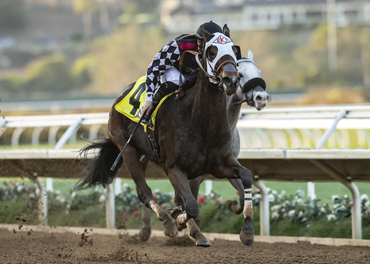 From DMTC Publicity
DEL MAR, Calif. (Nov. 11, 2018) — Perfectly placed by jockey Flavien Prat behind dueling leaders in the early stages of the $100,000 Betty Grable Stakes for Golden State Series eligible fillies and mares, Spiced Perfection surged between rivals to take command entering the stretch and drew off impressively to win the seven-furlong sprint by two and one-quarter lengths Sunday.

Bred by Premier Thoroughbreds, Spiced Perfection, sent off at 4-1 odds, scored her fourth win in six lifetime starts at Del Mar and fifth in 13 career efforts, running the distance in 1:23.21. Runner-up was Just Grazed Me under Tyler Baze, with S Y Sky, the 2-1 favorite, third, a length and one-quarter farther back, and three-quarters in front of fourth-place Love a Honeybadger in the field of eight older California-bred fillies and mares. Mo See Cal was scratched.

Spiced Perfection, a three-year-old daughter of former top sprinter Smiling Tiger, is owned by the Dare to Dream Stable of Michael Faber of Mundelein, Illinois and conditioned by Brian Koriner. She returned $10.60, $5 and $3.20 and earned $57,000 to increase her bankroll to $442,405. Prat also won the Betty Grable Stakes a year ago, aboard Majestic Heat.

In addition to winning the Betty Grable Stakes, Koriner also saddled two other winners, for a rare training triple. He won the sixth race with Fast Cotton for a $4.20 payoff and the day’s ninth and final race with Gypsy Blu in a $63.60 upset.