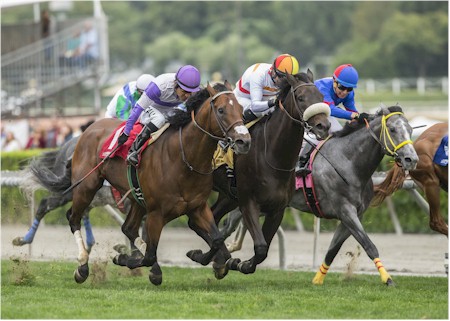 On Sunday at Santa Anita, Soi Phet ($96.80) scored a massive upset in the $102,070 Crystal Water Stakes for California-bred turf milers, holding off a sustained threat from the 4-year-old B Squared to prevail by a head.

The Crystal Water Stakes was Soi Phet’s first stakes win on turf in his 58th start. Soi Phet has won 14 races, seven of which were stakes.

The second-longest shot in a field of 11, Soi Phet was well placed throughout the Crystal Water. Soi Phet was fourth for the first six furlongs, stalking early pacesetter Well Developed through modest fractions of 23.20 seconds for the opening quarter-mile and 47.18 for a half-mile.

Turning into the stretch, Soi Phet was two lengths behind leader Tule Fog and trailed by about that margin at the eighth pole. Well Developed and Tule Fog were within a head of each other with a furlong remaining, but could not sustain the effort.

Soi Phet took the lead in the final strides to edge B Squared, who was a neck in front of Well Developed, a 7-2 chance.

“The plan was to break and follow the speed,” Quinonez said.

Owned by Mathilde Powell, Paul Viskovich, and Gerald Benowitz, Soi Phet had his third start of 2018 on Saturday. He was second in an allowance race with a $62,500 claiming option on March 23 when eligible to be claimed, and finished a well-beaten fifth behind Dr. Dorr in the Grade 2 Californian Stakes on April 28.

“When Dr. Dorr passed him, he said, ‘I’m too old for this and I’ll wait for another day,’ ” Powell said.

Dr. Dorr is a leading contender for the Grade 1 Gold Cup at Santa Anita on Saturday.

Powell said Soi Phet has thrived in recent training, weighing 1,167 pounds, a bit higher than his average weight of 1,145 in recent years.

“His weight is above anything he’s been in the last two years.”

Soi Phet, who has earned $955,250, is expected to start in the $100,000 Bertrando Stakes for Cal-bred milers at Los Alamitos on July 4. Powell said he plans to race Soi Phet sparingly in coming months, focusing on statebred races.

“I want to do what’s right for the horse,” he said.

The owners and Powell claimed Soi Phet for $16,000 at Hollywood Park in May 2013. The five-year anniversary of the acquisition is Wednesday. Since being claimed, Soi Phet has earned $918,170.