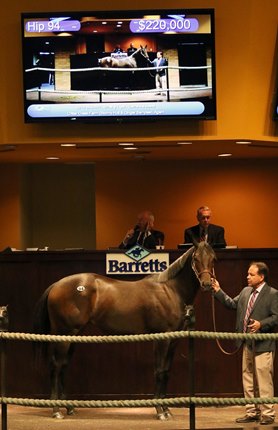 By Tracy Gantz
Stormy Hull once hoped he would one day sell a horse for $50,000. At the Oct. 17 Barretts October fall mixed sale in Pomona, Calif., Hull topped the sale with a $220,000 yearling filly he hauled to Southern California from Washington state himself.

The filly, named Smiling Diamonds, has plenty of pedigree. Consigned as Hip 94 from Hull and Ginger Samples’ Critter Creek Farm, she is out of Hull’s stakes-placed Slewdledo mare Carrie’s a Jewel, who is already the dam of California Diamond, champion California-bred 2-year-old male of 2016. The sale topper is by Smiling Tiger, California’s leading first-crop sire.

“I like Smiling Tiger a lot, and the dam is also very attractive,” said Gasparrelli. “California Diamond is a very good horse.”

“The top end of the market is getting stronger and more competitive,” said Kim Lloyd, general manager of Barretts. “Any time an above-average horse came in the ring, there was a lot of competition.”

Gasparrelli, who said he has about 20 horses in training, all with Puype, led all buyers at the sale. He purchased two for a total of $305,000. In addition to the sale topper, he went to $85,000 for Hip 147, a California-bred daughter of Slew’s Tiznow-Grand Advice, by Mr. Greeley, a full sister to 2017 El Camino Real Derby (G3) winner Zakaroff. Adrian Gonzalez’s Checkmate Thoroughbreds  consigned the filly.

Hull was ecstatic after selling the Smiling Tiger sale topper. He bought Carrie’s a Jewel for $5,000 and raises all of her foals himself in Sequim, Wash., after they foal in California. He said he ponied the Smiling Tiger filly himself to get her fit for the sale.

“These horses are my family,” Hull said. “I do everything—feed them, clean their stalls, pony them. This filly was spectacular from the time she was foaled. I have a weanling full brother to her as well, and Carrie’s a Jewel is in foal to Bluegrass Cat.”

Two other horses brought six figures at the sale, including a California-bred daughter of Acclamation-Ismene, by Tribal Rule. Consigned by John Harris’ Harris Farms as agent for Stephen Ferraro, the filly sold for $160,000. Trainer Terry Knight signed the ticket for Pete and Evelyn Parrella’s Legacy Ranch.

“She was a very good individual, backed up by a good pedigree,” said Knight, who recently became the general manager of Legacy Ranch near Clements, Calif. “And we also liked the fact that she is a Cal-bred.”