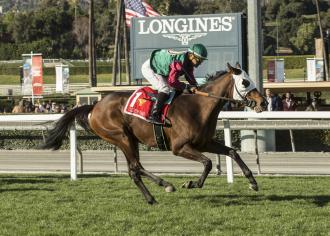 By Steve Andersen
ARCADIA, Calif. (February 19, 2018)-When she stopped beating herself up, Pulpit Rider beat the six other 3-year-old California-bred fillies in the $200,000 California Cup Oaks at Santa Anita on Monday.

Pulpit Rider was fussy in the gate but brilliant in winning her first stakes in the one-mile turf race. Trainer Mike Puype noticed in the winner’s circle that Pulpit Rider sustained cuts on her face and shoulder.

“She tried to turn over in the gate,” he said.

“Her turn of foot was scintillating,” Puype said. “She’s getting better.”

Nakatani had Pulpit Rider last through the opening quarter-mile and in sixth on the backstretch, racing off the rail. Felony One, a 54-1 outsider, set fractions of 22.65 seconds for the first quarter-mile and 46.51 for a half-mile.

One Fast Broad rallied four wide to reach contention in the stretch, but could not hold off Pulpit Rider.

One Fast Broad finished a half-length in front of X S Gold, who was followed by Mo See Cal, Nice Ice, Carpathia, and Felony One.

One Fast Broad was favored on the basis of her 2-year-old form in 2017, which included two stakes wins on dirt against California-bred fillies and two second-place finishes in turf stakes against open company.

Pulpit Rider, by Lucky Pulpit, has won 3 of 7 starts and earned $194,536, all for owners and breeders Larry and Marianne Williams.

Pulpit Rider was sixth in the Golden State Juvenile Fillies and fifth in the Soviet Problem Stakes last fall. One Fast Broad won both races.

The Cal Cup Oaks was Pulpit Rider’s second start on turf. She was third in an optional claimer against open company on the hillside turf course on Jan. 19.

Puype said Pulpit Rider will have her graded stakes debut in the Grade 3 Providencia Stakes, a $150,000 race for 3-year-old fillies at 1 1/8 miles on turf on April 7.