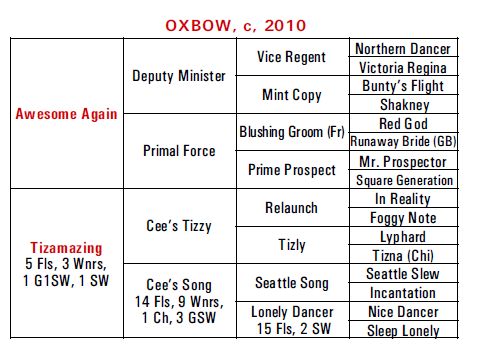 The fascinating part of Oxbow’s story dates back to the late 1980s, when the late Cecilia Straub-Rubens bought a couple of yearlings, paying $50,000 for a Seattle Song filly in 1987 and $72,000 a year later for a son of Relaunch. The story goes that Straub-Rubens was so excited after the purchase of the well-connected Relaunch colt that it threw her into a tizzy, hence the colt’s name.

Cee’s Tizzy was bred to be pretty good. With a tally of 86 stakes winners, including Breeders’ Cup winners Skywalker and One Dreamer, Relaunch proved himself one of the best stallion sons of In Reality. Then there was Cee’s Tizzy’s second dam Tizna, a Chilean import who landed three Grade I races during a highly distinguished American career.

There was no shortage of stamina in Cee’s Tizzy’s pedigree, as Relaunch’s exploits included a close second to John Henry in the GI San Luis Rey S. over a mile and a half and the versatile Tizna included the Ladies H. over a mile and a quarter among her major successes.

It was therefore no surprise to see Cee’s Tizzy tackle a mile and a quarter in the 1990 GI Super Derby. By that time he had won three minor races in very fast time in California and he justified his shot at the big time. After leading for a mile at Louisiana Downs, he lost second place to Unbridled by only a neck, even though it transpired that he had suffered a career-ending knee fracture in the process. Although Cee’s Tizzy managed only six starts, his four grandparents collectively notched a total of 130 starts, so he was qualified to sire progeny more durable than himself.

Straub-Rubens’ other yearling, Cee’s Song, proved more durable, but less talented. She won only once, on dirt, during an 18-race career, and was also second eight times on the turf. However, she was a granddaughter of the great Seattle Slew. Although her sire Seattle Song wasn’t a great success as a stallion, with only one Grade I winner to his credit, he had been good enough to win at the highest level in France (Prix de la Salamandre) and the U.S. (Washington D.C. International).

As a non-graded winner, Cee’s Tizzy started his stallion career in 1991 at a bargain-basement level and he was to spend his first nine seasons at fees ranging from $1,500 to $2,500. His crops during this time averaged little over 30 foals, but he had one fairly constant companion in Cee’s Song. Over an 11-year period, the mare produced nine foals to Cee’s Tizzy and she was carrying the last of the nine, Oxbow’s dam Tizamazing, when she was sold for $2.6 million at Keeneland’s 2001 November Sale.

Of course Tizamazing–who was sold for $1 million as a yearling–was by no means the only celebrity among the nine siblings. Her immediate predecessor, Tizdubai, justified her $950,000 price tag by taking the GII Sorrento S. Another full sister, Tizso, failed to win in two attempts, but has made ample amends by becoming the dam of Paynter (Awesome Again), the colt who looked a threat to the best of his generation when he landed last year’s GI Haskell Invitational S. Of course, severe illness then threatened to end the colt’s life, not just his career, before Paynter staged a truly remarkable recovery.

Cee’s Song’s daughters had a lot to live up to. Budroyale, the second of her foals, had been claimed on his debut, but went on to build earnings of over $2.8 million, with a fair slice of that coming from his second to Cat Thief in the 1999 GI Breeders’ Cup Classic. Then Budroyale’s younger brother Tiznow went one better in the 2000 Classic, before following up in 2001. Tizbud, the last of the partnership’s four colts, also became a stakes winner.

In trying to unearth the source of Cee’s Song’s success, I delved through her female line. Her fourth dam Blue Canary, born in 1952, had the attention-grabbing record of having raced 127 times over a seven-year period, for an average of 18 starts per year. Perhaps she would have been retired earlier had her connections known that her younger half-brother, Crimson Satan, was to become 1961’s champion 2-year-old. Incidentally, the progeny of their dam, the Chilean-bred Papila, provide a reminder of a totally different era. Despite his class, Crimson Satan packed 58 starts into four seasons, while his half-brothers Red Red Robin, Cardinal Sin and Sports Reporter respectively raced 72, 89 and 92 times.

To get back to Oxbow, it is remarkable that he and Paynter are both by Awesome Again. With sisters as their dams, they are brothers-in-blood. The incentive for pairing these sisters of Tiznow with Awesome Again surely stems from the fact that their grandsire, Relaunch, figured as the broodmare sire of Ghostzapper, Awesome Again’s most outstanding winner.

Ghostzapper’s arrival to stand alongside his sire at Adena Springs in 2006 can’t have made things any easier for the 1998 Breeders’ Cup Classic winner. By that time Awesome Again’s fee stood at $125,000 and it was to rise to $150,000 in 2008, on the strength of his having sired four winners on Breeders’ Cup day (Ghostzapper, Wilko, Round Pond and Ginger Punch).

Awesome Again was originally slated to cover the 2009 season at the same fee but, with the start of the economic downturn, his fee was lowered to $125,000. Even so, he attracted only 67 mares, for 57 live foals. His owners responded by slashing his fee to $50,000 for the next three seasons and the ploy worked, at least numerically.

It will be fascinating to see whether these cheaper crops can boost Awesome Again’s stash of Grade I winners, which now stands at 13 from his first 11 crops. There is absolutely no reason why they shouldn’t, as he spent his first five years at $50,000 and it was those first five crops which produced 10 of his Grade I winners, the exceptions being Game On Dude, Paynter and Oxbow.

The next difficult question facing Oxbow is whether he has enough stamina for the mile and a half of the GI Belmont S. Although his penchant for racing in the front rank won’t make his task any easier, he is in with a chance. Paynter attempted to lead throughout in last year’s Belmont and failed by only a neck to withstand Union Rags’ challenge. Then there’s the fact that Tiznow, a brother to Oxbow’s dam, sired Belmont winner Da’Tara, while Deputy Minister, sire of Awesome Again, also had a Belmont winner, Touch Gold, among his best representatives.