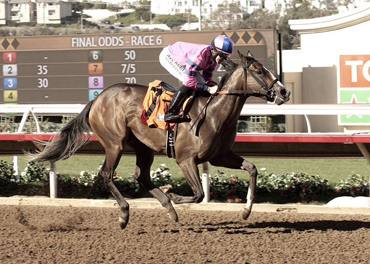 With Joe Talamo in the saddle, Pacific Heat drew off impressively in the final furlong to score by five and one-quarter lengths in 1:24.31 for the seven furlongs over Del Mar’s main dirt surface.

Sambamzajammin, a 22-1 longshot piloted by Miguel Perez, closed to be second, with Patriotic Diamond, the 2-1 second choice, third, three-quarters of a length behind the runner-up. Yodelsong was fourth. Withdrawn from the original field were Sharp Holiday and Obey.

Pacific Heat, a daughter of Unusual Heat, was scoring her second win in as many starts, having broken her maiden easily at Los Alamitos a month ago. The filly, trained by Peter Eurton and owned by Alesia, Burns and Ciaglio, earned $110,000 with her triumph.