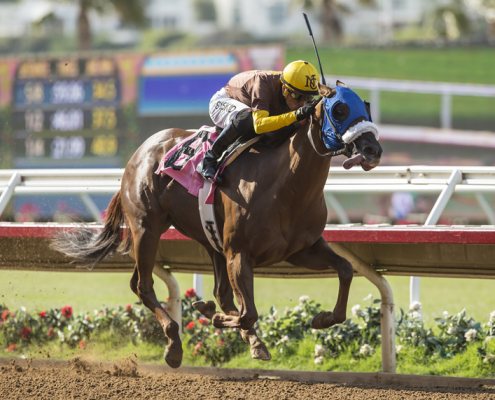 With jockey Ruben Fuentes in the saddle, Naughty Tiger, sent to the gate at 5-1, surged to the front turning into the stretch and continued on gamely to score by a length and one-quarter over Accomplishedsister who nosed out 2-1 favored Lippy for place honors. Time for Suzzie was a distant fourth in the field of eight fillies. Time for Kisses was scratched.

Naughty Tiger, owned by a partnership of Brian Blackburn, Shannon Hunt and Mike Marsden and trained by Edward Freeman, ran the five and one-half furlongs in 1:06.27 and returned $12.40, $5.60 and $3.20 after her second win in three races. She broke her maiden in her second race, in June, at Santa Anita. First money of $57,000 increased the filly’s earnings to $98,880. She was a $40,000 purchase at the Barretts two-year-old training sale last April.

Trainer Ed Freeman: “She didn’t break very well and Ruben (Fuentes) used his head and just let her settle. I had told him ‘I don’t care where you are on the backside, the horses to worry about are probably going to be coming from behind.’ It didn’t work out all that well, she went five wide on the turn, but she went into the race so fit and she was good enough today.”