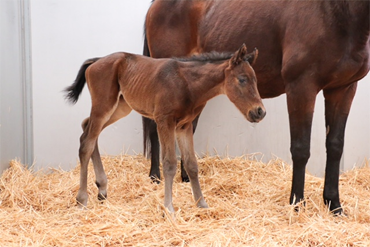 Coalinga, CA (February 3, 2018)-Lucky Pulpit’s last and only foal of 2018 arrived at 8:35 p.m. on January 31 at John Harris’ Harris Farm near Coalinga CA. The plain bay colt is out of Mother Luck (Street Sense x Alishir’s World). His dam is a half-sister to multiple stakes winner and G1 stakes placed Antares World. The unnamed colt was bred by his owners Mr. and Mrs. Larry D. Williams’ Tree Top Ranch, who also owned his sire.

Lucky Pulpit is most noted as the sire of multiple Eclipse winning and two-time Horse of the Year winner California Chrome ($14,752,650). Lucky Pulpit entered stud in 2007 and stood his entire career at Harris Farms. He was California’s Leading Freshman Sire of 2010 and topped the California General Sire List in 2014 and 2016. In 2017, Lucky Pulpit was the Leading Sire of California Conceived Foals by number of winners and of two-year-olds by earnings.