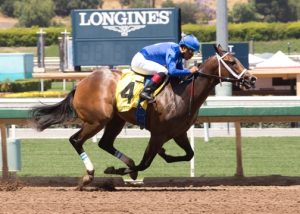 Arcadia, CA (May 18, 2017)-Ismelucky was second in her debut in a maiden race for California-bred 2-year-old fillies on May 4. On Thursday, she won a Santa Anita maiden race against open company under jockey Martin Garcia.

After disputing the early pace, Ismelucky won by 2 1/2 lengths over Empress of Lov, who closed well from the back of the field. Ismelucky was timed in 52.67 seconds. The filly, bred by Stephen Ferraro is by Lucky Pulpit, is trained and co-owned by Jeff Bonde, she was purchased for $90,000 at the 2016 Barretts October Yearling Sale.

Ismelucky is out of Ismene, who won two stakes for 2-year-old fillies at Santa Anita in 2011 – the Anoakia Stakes and California Breeders’ Champion Stakes. Ismelucky earned $42,120 for her daylight score increasing her earnings to $52,920.