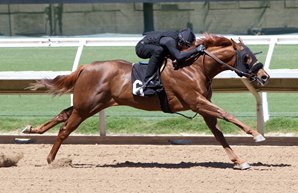 A filly by Lucky Pulpit, who recorded the fastest time at the Barretts under tack preview, brought a finally bid of $360,000 from Dennis R. O’Neill.

The filly had worked a furlong in :09 4/5 in preparation for the Barretts sale.

Bred by The Cole Ranch in California, the filly who breezed in :09 4/5 was the only horse in the catalog by the late Lucky Pulpit, sire of two-time Horse of the Year California Chrome. Andy Havens’ Havens Bloodstock Agency consigned the youngster as Hip 6.

Now named Californiabyanose, the filly is out of the Mr. Greeley mare Nine to Five Lady, from the family of Breeders’ Cup Classic (G1) winner Concern. Californiabyanose sold for $42,000 to John Brocklebank, as agent, at last year’s Barretts October sale.