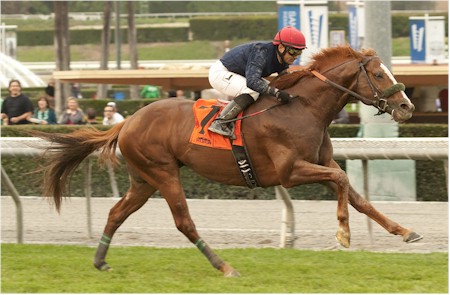 Lakerville enters the breeding shed off of a dynamic career as a turf sprinting star on the Southern California racing circuit. He is a Graded placed stakes winner who recorded 5 wins and 4 seconds in 11 career starts as a deep closing turf sprinter. Out of the Out of Place mare Foreverinthegame, he is an impeccably bred 6 year old chestnut horse and the full brother to Grade 2 and multiple stakes winner Gervinho. Lakerville stands 16.0 hands and won the 2014 Clocker’s Corner Stakes at Santa Anita Park doing so off of a 16 month layoff. He also raced to unparalleled closing fractions of 20.80 for ¼ mile, 32 1/5 for 3/8 mile and 42 1/5 for ½ mile.