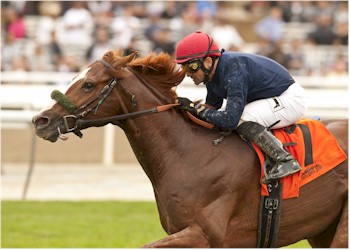 Well in-hand approaching the dirt crossing at the top of the lane, Nakatani was about five lengths behind a three-horse spread consisting of early leader Ankeny Hill, El Commodore and 2-1 favorite Ready for More.  Nakatani set after the leaders crossing back to the turf and overhauled Ankeny Hill and Edwin Maldonado inside the sixteenth pole to comfortably hold off a late run from Sweet Swap and Rafael Bejarano.

Idle since Aug. 15, 2012 at Del Mar, Lakerville made his seventh career start in the Clockers’ Corner.

“He was ready to come back two or three times, but he just got away from us in the mornings,” said trainer and co-owner/breeder Barry Abrams.  “When you have a great horse, you take your time.  This time, I had Corey come out and get on him every single time he worked and it paid off.

“I wouldn’t bet on him today, but I knew he had too much class.  He really wants to run a mile, but we’ll plan on running against Cal-breds in the (6 ½ furlong turf) Sensational Star (Feb. 22) next.”

In addition to Abrams, Lakerville is owned by Madeline Auerbach, LLC.  He picked up $60,120 for the win, increasing his earnings to $272,660.  Never worse than second, Lakerville picked up his fifth win and his first stakes victory.

“He’s a real ‘racey’ horse so he wants to do too much, too soon, too early,” said Nakatani.  “He’s very athletic, and the key is being able to harness his ability.”

Sweet Swap, off at 5-1 in the nine-horse Clockers’ Corner, broke slowly and stumbled badly leaving the gate, but made up ground quickly to be 2 ½ lengths back of the winner at the top of the stretch.

“My horse got nervous in the gate,” said Bejarano.  “He sat down a little and it cost me the race.  He loves to come from behind, but I wish I could’ve had a little better position.”

Sweet Swap finished a half length in front of longshot Di Giorgio and Tyler Baze and paid $7.60 and $5.80.

An Argentine Group I winner in his most recent start on May 1, 2013, Di Giorgio made his U.S. debut for trainer Ron McAnally and showed plenty of heart in the drive, overtaking Ready for More and Ankeny Hill late to finish third by a half length.