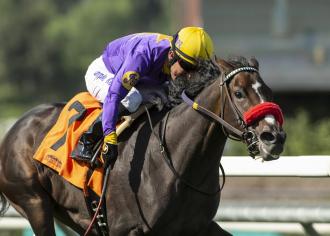 Arcadia, CA (October 8, 2018)-The Lakerville juvenile daughter, Lakerball was trying three new items in the $100,000 Surfer Girl Stakes. It was her stakes debut and trying turf for the first time as well as routing for the first time. Jumping quickly from the gate the filly kept rolling along from her outside post stopping the clock in 1:35.23.

She defeated foes by War Front, Into Mischief and Midshipman.

From her four outings her record now stands at two wins and a third and has earned $84,480

Bred by Rancho de Los Aviadores in California and Lakerball is out of the Capsized broodmare Category Ten.

Lakerville is a brilliantly fast stakes winning son of  Unusual Heat and stands for private treaty.