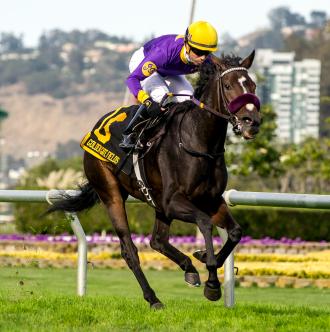 O’Neill sent the filly north to see how well she shipped and because he wanted to keep her on the turf after scoring an upset in the Surfer Girl at Santa Anita in her previous start.

The journey didn’t bother the filly at all, and she got a dream trip under Alonso Quinonez on Golden Gate’s Lakeside Turf Course, sitting third while three wide behind pacesetting Brahms Command.

When Quinonez asked her to run nearing the quarter pole, she responded nicely, taking command in the lane of the one-mile race. She pulled clear of the field, defeating Brahms Command by five lengths in 1:38.57. Tomlin finished well to be third, 3 1/2 lengths behind Brahms Command with Sneaky Dianne, the longest shot on the board, another 2 1/2 lengths back.

All six runners were coming off wins.

Owned by Pappas Horse Racing Corp., Purple Rein Racing, and Tom R. Roberts, Lakerball scored her third victory in five starts., earning $45,000. She now has career earnings of $129,400 and is 2 for 2 on turf.

She won her debut for O’Neill in a $50,000 maiden claimer on Aug. 8 at Del Mar after running third for trainer Richard Baltas in her career debut. She was fifth in her debut against winners before winning the Surfer Girl.