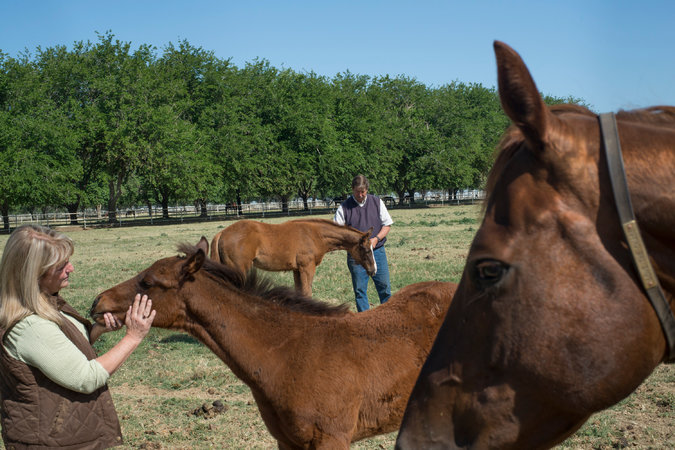 By JOE DRAPE NYTimes.com
COALINGA, Calif. (MAY 16, 2014)—There is no bluegrass here or limestone fences framing postcard-ready landscapes. A drought has drained the San Joaquin Valley of any color other than beige. There is no mistaking the smell in the air, either: It is cow manure from the feedlot of California’s largest beef producer.

This is a working ranch, after all, where cows graze, almonds and pistachios grow on trees, and asparagus sprouts from the arid ground. The horses here are a sidelight, not sheikh-owned stallions that command $100,000 in the breeding shed. There is no harem of impeccably bred mares owned by the Wertheimers of the House of Chanel or any other of the sport’s boldfaced names.

But this month a horse named California Chrome, who was bred on a patch of this 14,000-acre ranch, ran off with the 140th Kentucky Derby and lifted the spirits of small-time horsemen everywhere. The colt was bred by Steve Coburn and Perry Martin, first-time breeders whose success has provided a shot of adrenaline for California breeders, long considered the poorer cousins of their Kentucky counterparts.

“It’s easy to get to where it looks like a hopeless task to come up with a good horse,” said John Harris, whose family founded Harris Farms in 1937 and who has been breeding horses here for nearly a half a century. “A horse like this comes along and shows everyone that you can do it.”

There have been good horses bred in California in the past, like Tiznow, the 2000 Horse of the Year. But California Chrome became only the fourth California-bred horse, and the first since 1962, to capture the Derby. He is a strong favorite in Saturday’s second leg of the Triple Crown, the Preakness Stakes.

The dearth of Derby champions from California can be traced to numbers and genetics. California accounted for 8 percent of the more than 21,000 foals registered in the United States in 2012. Last year, there were 2,353 mares bred in California compared with 15,548 bred in Kentucky.

“Where the stallions are, the mares are going to be,” said Dave McGlothlin, who runs the horse division of Harris Farms.

So instead of relying on multigenerational horse families like the Phippses, owners of the 2013 Kentucky Derby winner, Orb, and deep-pocketed commercial breeders with their large band of broodmares, farms here use breeders like Coburn and Martin, who are equipped with one or two mares and the dream of creating a home-run horse.

At first blush, California Chrome’s parents did not seem like champion stock. A time-honored racing maxim says, “breed the best to the best and hope for the best.” In this case, Coburn, Martin, with their limited budget, settled for “best available.”

Coburn is employed by a Nevada company that makes magnetic tape for items like credit cards and hotel keys; Martin owns a California laboratory that tests safety equipment.

Lucky Pulpit, the stallion that sired California Chrome, won only three of his 22 starts. Last year, he earned only $2,500 per mare. Lucky Pulpit was not even Coburn and Martin’s first choice — they originally unsuccessfully bred Love the Chase to a stallion named Redattore.

Love the Chase, the mare, is a little thing who managed only a single victory in six races, all at Golden Gate Park near the bottom level of its claiming ranks.

But Coburn and Martin saw something in them. They bought Love the Chase for $8,000, and their story has already entered racing lore. The breeding was not blind luck. The duo had studied the horses’ bloodlines, cross-pedigrees, and physical characteristics. On second look, the pedigree of Lucky Pulpit seemed to offer million-dollar bloodlines at a nickel price.

“He’s got Secretariat on his daddy’s side, and Seattle Slew, and the mare for A.P. Indy by Secretariat,” said Coburn, referring to the 1973 and 1977 Triple Crown champions and the 1992 Horse of the Year.

Now, Lucky Pulpit is in demand. His stud fee quadrupled after California Chrome won twice earlier in the year.

Still, California Chrome’s future greatness was not obvious to those caring for and training him, even if he was hard to miss with his shiny chestnut coat and white face.

“He was flashy looking because of all his white, but he didn’t really stand out when he was in the field,” McGlothlin said. “There wasn’t any sense that he’d become the rock star that he is.”

It took California Chrome a while to find his way on the racetrack. He won three times but also finished out of the money three times.

“He was kind of green,” said Art Sherman, his 77-year-old trainer. “He grew up, and he’s got a good head, good shoulder, and no wasted motion. He just developed into a runner.”

Sherman knows a thing or two about runners. He was a teenage exercise rider who shared a boxcar for a couple nights with a horse named Swaps before Bill Shoemaker rode him to victory in the 1955 Derby. With California Chrome, Sherman is becoming enchanted all over again.

“I’m kind of just sitting back, and each time he goes out there, it kind of takes my breath away,” he said.

With every victory — five in a row now — the people around California Chrome grow a little more emboldened. In March, Coburn and Martin turned down $6 million for a 51 percent share of their colt. In April, Coburn predicted Chrome would win the Derby.

In May, after making good on that guarantee, Coburn vowed that California Chrome would sweep the Preakness and the Belmont and become the 12th Triple Crown champion, and first one bred in California.

There are plenty of horsemen on backwater ranches who hope he is right. Larry and Marianne Williams, who break and train horses on their farm in Idaho, own Lucky Pulpit. They have heard from stallion stations in Kentucky but said they were inclined to leave him in California.

The yearling and the foal following Love the Chase around the paddock at Harris Farms are not going anywhere, either. They are full sisters to California Chrome and belong to Martin and Coburn. Greatness, they argue, is not limited by geography.