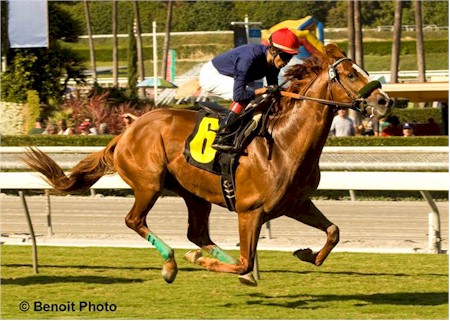 Idle 17 months, Lakerville, a 6-year-old horse by Unusual Heat, came back running to easily win the restricted Clockers’ Corner Stakes by 1 ¼ lengths down the hill on Jan. 26.  Lightly raced, Lakerville, in his only other try down the hill, was a first-out maiden winner over the course on Oct. 22, 2011.

Owned in-part by Abrams and Madeline Auerbach, Lakerville has a tremendous closing kick and has five wins and two seconds from seven overall starts.  He’ll be ridden back by Corey Nakatani, who was up for the Clockers’ Corner win at 8-1.

Jerry Hollendorfer will be represented by three horses in the Sensational Star, Ain’t No Other, Kate’s Event and Summer Hit.

Although he was the beaten 6-5 favorite in the 1 1/8 miles Cal Cup Turf Classic Jan. 25, multiple graded stakes winner Summer Hit heads the Hollendorfer attack.  A scintillating six length winner of the Grade III Berkeley Handicap going 1 1/16 miles two starts back at Golden Gate Fields Nov. 29, Summer Hit took the Grade III All American Stakes on May 13, 2013 and he has the credentials to win the Sensational Star.

A 5-year-old gelding by Bertrando, Summer Hit pressed the pace and was an impressive allowance winner down the hill nine starts back on Feb. 10, 2013—his last time sprinting.

Owned by Hollendorfer and John Carver, Summer Hit is 16-9-2-2 with earnings of $417,755, and he’ll be ridden back by Rafael Bejarano, who has guided him to a pair of wins in four tries.

A winner of last year’s Sensational Star, Ain’t No Other was a well beaten sixth in the Grade III Daytona Stakes down the hill on Dec. 28.  With one win, two seconds and one third over the course, Ain’t No Other takes a drop in class and figures to get a stalking trip.

Trainer Marty Jones will be represented by Ambitious Brew and Mr. Ornery, a pair of homebreds who each come off hillside wins.

Owned and bred by Pamela Ziebarth, Ambitious Brew, handled by regular pilot Mike Smith, was a prompt half length winner of an open allowance on Jan. 17 at 4-5.  A 4-year-old gelding by Tizbud, Ambitious Brew was a statebred allowance winner in his only other hillside try three starts back on Nov. 3.  He has three wins and three seconds from six starts and earnings of $167,920.

Mr. Ornery rallied from off the pace to prevail by a neck in a 12-horse field of Cal-breds on Jan. 20.  A 5-year-old gelding by Cee’s Tizzy, Mr. Ornery will try the hillside course for the second time in his 13th overall start Saturday.

Owned and bred by Donald and Sally Valpredo, Mr. Ornery has two wins, three second and a third, with earnings of $110,720.