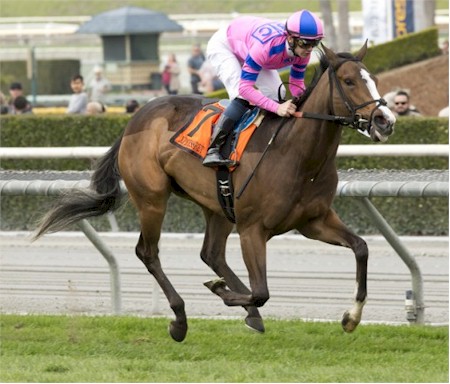 By SantaAnita.com
ARCADIA, Calif. (Jan. 30, 2016)–In her first-ever try on turf, heavily favored Pacific Heat responded with a resounding 5¼ length win in Saturday’s $200,000 California Cup Oaks for 3-year-old fillies. Ridden by Flavien Prat and trained by Peter Eurton, the California-bred daughter of Unusual Heat got one mile in 1:35.75.

Attentive to the pace throughout, Pacific Heat took command going to the quarter pole and the Oaks was, for all intents and purposes, over.

“She was relaxed going down the backside,” said Prat. “But when a horse came up on her outside (Run Like the Boss, with Joe Talamo), she grabbed the bit and was a little bit aggressive after that. I think it was just because she is a ton of horse and she doesn’t know much yet. She’s pretty impressive.”

“The way she was training, it (a dominating performance) wasn’t surprising,” said Eurton. “The biggest question to me was not the turf, but whether she could get two turns and there was no question about that today.”

Owned by Alesia, Burns and Ciaglia Racing, LLC, Pacific Heat got her third win from four starts and with the winner’s share of $110,000, increased her earnings to $250,250.

Ridden by Rafael Bejarano, Patriotic Diamond put in a good bid around the far turn, but was second best. Off at 4-1, she paid $3.60 and $2.40 while finishing 2 ¼ lengths in front of Eurton’s second entrant, Cheekaboo.

Pacific Heat was bred in California by Harris Farms and Donald Valpredo.