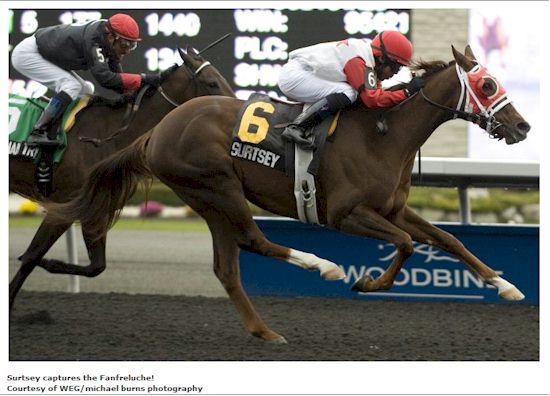 Out of the stakes placed Bold Executive mare Kick`em Jenny, she has won two races from six starts and $126,171 for her owner breeder Yvonne Schwabe Thoroughbreds.

When the field turned for home, the pacesetter still held sway, but was challenged and passed by the winner late in the lane.   It was the first Woodbine stakes win of the season for Bridgmohan, Attard and Schwabe, while Surtsey, who was supplemented to the race for $3,000, picked up $90,000 for the victory.

“Kevin and I talked about it (the race) this morning and it worked out like it looked on paper,” said Bridgmohan.  “She ran extremely well.  That was our game plan from the beginning.  We wanted to get her off the pace a little bit and thankfully I was able to do that and she came running.”

Added Attard, “The race was shaping up like it was a good opportunity to get some black type.    Fortunately, we got it all.   She’s run really well.  In the Shady Well (Stakes, July 15 when finishing seventh), she had a tough trip, a lot of excuses.  Her last race, it wasn’t a perfect trip either.   She was kind of bogged down on the inside.  We sent her home for a little break, brought her back in and this race just came up.”

Heatseeker, a nine-year-old by Giant’s Causeway out of the Defensive Play mare Rusty Back, stands at Harris Farms in Coalinga, California. He has 60 two-year-olds in his first crop and Surtsey is one of seven starters to date.

Heatseeker won seven times from 17 starts in four seasons of racing, capped by a win in the 2008 Santa Anita Handicap (G1) where he set a track record of 2:00.42 for 1-1⁄4 miles on Santa Anita’s Park’s synthetic surface. He also won two other graded stakes for his career.