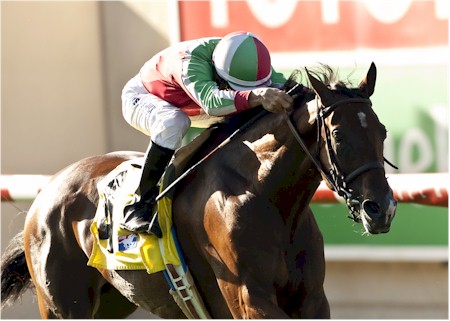 By Steve Andersen
DEL MAR, Calif. (August 17, 2014)-The $32,000 claim of Heat Du Jour at Santa Anita in May paid a massive dividend on Sunday when the 4-year-old filly won the $151,000 Solana Beach Handicap for California-bred fillies and mares at Del Mar.

Ridden by Kent Desormeaux, Heat Du Jour ($21.40) closed from eighth in a field of 10 to win by a convincing three lengths over the 2013 stakes winner Qiaona.

Heat Du Jour ran a mile on turf in 1:34.73. The Solana Beach was her third start for trainer Jerry Hollendorfer since the claim. She was second and sixth in her first two starts for the stable, both non-claiming races.

Hollendorfer said in the winner’s circle that the claim “looks good now. She’d been training great and we thought there was enough speed for her to come from off of it.”

Heat Du Jour was toward the back of the field in the first half-mile behind Sing and Tell, who set an early pace of 22.70 and 46.05 seconds. She was seventh on the final turn.

Kathleen Rose, the 8-5 favorite, led in the stretch, but could not maintain her advantage, missing second by a nose. Star Field finished fourth, followed by Wild in the Saddle, Warren’s Veneda, Sing and Tell, Unusual Hottie, and Magic Spot.

“Mike said the turf was stinging her feet,” Hollendorfer said. “He said she was okay, and that was important to find out.”

Doinghardtimeagain won the Grade 2 Great Lady M Stakes at Los Alamitos in July. She has won five stakes in her career.