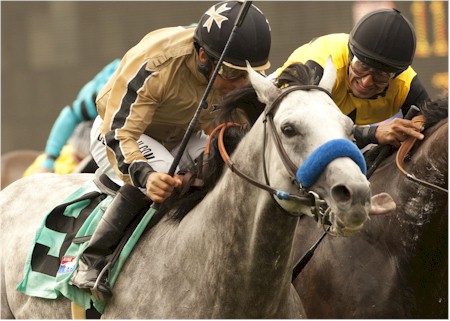 Since he returned to racing in February following an 18-month break caused by a tendon injury, He Be Fire N Ice has won 4 of 5 starts, with each win coming on turf. The California Dreamin’ Handicap, restricted to California-breds, was He Be Fire N Ice’s third consecutive win.

Ridden by Victor Espinoza, He Be Fire N Ice ($10.80) closed from sixth in a field of nine to win the California Dreamin’ over 1 1/16 miles by a head over Rock Me Baby. He Be Fire N Ice moved closer to the front with a wide rally on the turn and caught Rock Me Baby in the final sixteenth.

“It looked like there was a ton of speed in there,” trainer John Sadler said. “Our strategy was to get back and put in a run. He’s been going good since I put him on the grass at Santa Anita.”

Summer Hit, the winner of the Grade 3 All American Stakes at Golden Gate Fields in May, was the 9-5 favorite. He was second with a furlong remaining but was beaten 2 3/4 lengths.

He Be Fire N Ice races for Ron and Barbara Perry’s Cicero Farms. By Unusual Heat, He Be Fire N Ice has won 5 of 12 starts and $262,330 and is the 38th stakes winner for his sire. He was a maiden winner in 2011 when trained by Ron Ellis before being sidelined by injury.

He Be Fire N Ice’s only loss since being switched to turf at Santa Anita in early April was a seventh in the Tiznow Stakes on the synthetic main track at Betfair Hollywood Park on April 27. He Be Fire N Ice followed with turf wins against open company in an allowance race and an optional claimer at Hollywood in May and June.

Sadler said He Be Fire N Ice might start again before this meeting ends Sept. 4. “I’d like to run him twice at this meeting,” he said.