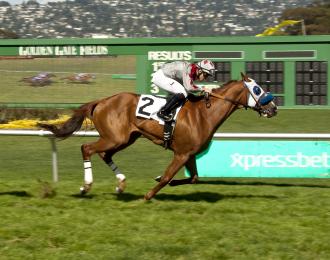 By Chuck Dybdal
Grecian Fire  responded gamely in the lane to pull off an impressive victory in the $75,675 Alcatraz Stakes at Golden Gate Fields on Sunday.

A gelded son of Unusual Heat, a top California turf sire, out of Maggie’s Odyssey, a turf stakes-placed daughter of Kitten’s Joy, one of the nation’s top turf sires, Grecian Fire ($11) wore blinkers for the first time and sat closer than he had in his first two turf starts. He sat just outside Harvest a Storm down the backstretch and moved up to stick his head in front at the quarter pole.

But he was immediately challenged by favored Anyportinastorm, who was stretching out for the first time, and had his head in front at the eighth pole.

While those two were dueling, More Power to Him, who had run second in both the California Derby and Grade 3 El Camino Real Derby (on a disqualification), was unleashing his closing kick.

But Grecian Fire dug in as jockey William Antongeorgi III went to the left-handed whip.

“He responded for me and kicked back on,” said Antongeorgi as Grecian Fire began to edge away from his rivals in the one-mile turf stakes for 3-year-olds.

At the wire, Grecian Fire was 1 1/4  lengths in front of More Power to Him, who edged Anyportinastorm by a nose for second.

Antongeorgi said that trainer Jerry Hollendorfer “wanted [Grecian Fire] to get out on his way” and added blinkers.

“Harvest a Storm went so we sat off him,” said Antongeorgi. “After the quarter pole, the horse on the outside Anyportinastorm headed us, and I got into him left-handed.

“He was on his toes in the paddock and in the post parade. I knew he would be alive out there, and he dug in for me.”

A KMN Racing homebred, Grecian Fire earned $45,000 for his first stakes victory, nearly doubling his bankroll or $90,625. It was the second win in six starts for the California-bred.