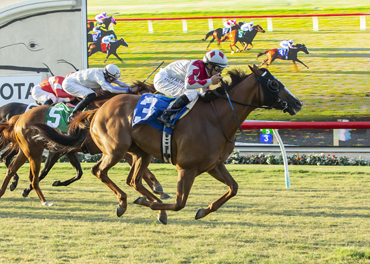 Grecian Fire, a five-year-old son of Unusual Heat bred by owner KMN Racing, was forced to take up sharply while rallying when The Hunted bore in, causing the eventual winner to bear out and interfere with runners to his outside. After posting the inquiry sign and viewing videotape of the incident, the stewards absolved Grecian Fire of blame and certified his triumph.

“My goodness, I got hit hard on the turn there,” said winning rider Mike Smith. “The six horse (The Hunted) came over and hit me hard. I was lucky we didn’t go down. It was good they ran that :22 and :45 early. That allowed me to come late and get up, even after what happened. If I don’t get hit, I win by 10.”

Impressively, Grecian Fire recovered to rally in the stretch and outfinish 25-1 The Street Fighter, reaching the wire a length in front in a swift 1:39.85 for the mile and one-sixteenth over the infield grass circuit. Third was What a View, who set a fast pace in his first race in almost a year while finishing a half-length behind runner-up The Street Fighter. Fourth in the field of eleven turf runners was longshot Hardboot.

“I can tell you this…everyone is looking for superlatives right?” said trainer J. Keith Desormeaux. “I’ve never seen anything like that. In a stake, how do you recover from something like that and close the way he did. It was a little unnerving because on the live shot it looked like a no-brainer: the six (horse) came over on him, clipped heels and overreacted. It took a while and they shouldn’t do that to us.”

The Hunted, who was a close second choice in the wagering, also at 3-1, finished seventh.