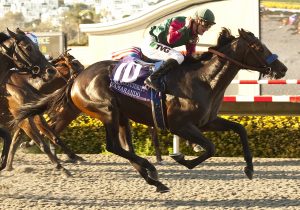 Del Mar Futurity Grade One winner and California-bred Champion Tamarando retires from racing with earnings of $722,652 and will enter stud this year at Harris Farms for $2,500 live foal.

Bred and raced by Mr. and Mrs. Larry D. Williams, Tamarando won at distances from 5 1/2 furlongs to 1 1/8 miles in his first 10 starts at 2 and 3, winning the Del Mar Futurity-G1 on Polytrack in his stakes debut, the El Camino Real Derby-G3 on Tapeta, the Real Quiet Stakes on Cushion Track, and placing in the FrontRunner Stakes-G1 on dirt and CashCall Futurity-G1. He received 118 pounds on the 2013 Experimental Free Handicap, the highest weight assigned to a California-bred juvenile.

Tamarando will stand for an introductory fee of $2,500 live foal, payable at foaling. Inquiries should be directed to Dave McGlothlin or Debbie Winick at Harris Farms at 1-800-311-6211 or davem@harrisfarms.com.