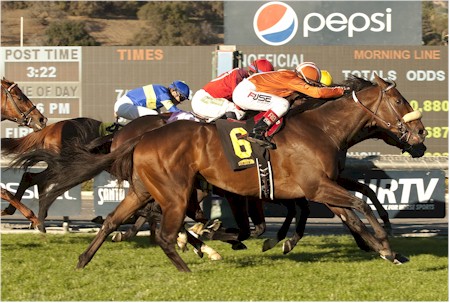 Turning into the stretch of the one-mile turf race, Gervinho was pushed wide by a chain reaction of trouble, but recovered to prevail by a head over Procurement in the field of nine 3-year-olds. Gervinho ($9) was timed in 1:33.47.

Jockey Rafael Bejarano was left impressed by Gervinho’s rally in the final quarter-mile. The colt was eighth in a field of nine with a furlong remaining.

“I almost clipped heels,” Bejarano said. “After that, I had to get him going again. He was running. He was definitely the best horse in the race.”

No Jet Lag was the 7-5 favorite. No Jet Lag was near a quick early pace of 23 and 45.19 seconds set by Horizontalyspeakin and faded through the final furlong.

Gervinho lost his next three starts, including a fourth in the Grade 1 Hollywood Derby at Betfair Hollywood Park on Dec. 1 before winning the Grade 2 Sir Beaufort.

As late as Thursday morning, Gaines was unsure whether to run Gervinho.

“I was fussing over him,” Gaines said in the winner’s circle. “He was a little quiet this morning and I was concerned. I’m a worrywart trainer.”

Gervinho has won 4 of 9 starts and $422,140. The Grade 2 Sir Beaufort Stakes was Gervinho’s third stakes win. He won the minor Zuma Beach Stakes on turf for 2-year-olds in October 2012 before finishing fifth in the Breeders’ Cup Juvenile Turf at Santa Anita in November 2012.

Gervinho was sidelined with a knee injury following that race, and returned to racing in June.