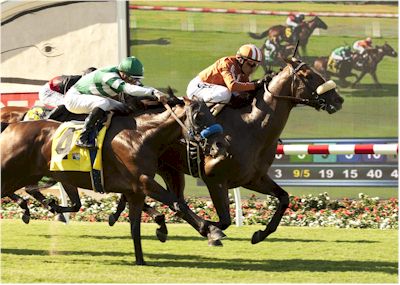 Ridden by Rafael Bejarano, Gervinho closed from fifth in a field of 10 to win the one-mile turf race by a neck over 14-1 Greeley Awesome. Freakin Rocket finished third, his first loss in his third career start.

The unlucky horse in the field was 9-5 favorite Undrafted, who was stuck behind horses on the turn and raced in traffic in the stretch before finishing fourth, beaten 1 1/4 lengths.

Gervinho ($7.80) had a more fortunate trip under jockey Rafael Bejarano. Fifth with a quarter-mile remaining, Gervinho was guided to the outside of runners in the stretch and quickened well to take the lead in the final furlong.

“I had to get a good position,” Bejarano said. “I decided to wait as long as I could. He can go a little farther. He’s getting better.”

Owned by Santa Anita chief executive Keith Brackpool and trained by Carla Gaines, Gervinho has won 3 of 5 starts and $219,140. At 2, he won a maiden race and the Zuma Beach Stakes on turf before finishing fifth in the Breeders’ Cup Juvenile Turf at Santa Anita behind winner George Vancouver.

Gervinho had a bone chip taken out of a knee following that race. In his first start of 2013, he finished second to Surfcup in the Silky Sullivan Stakes for California-bred 3-year-olds on turf at Golden Gate Fields on June 9.