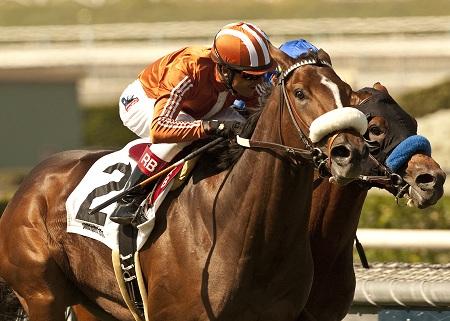 Gervinho is by Unusual Heat, out of the Out of Place mare Foreverinthegame, was bred by Barry Abrams and Madeline Auerbach, is owned by Keith Brackpool and trained by Carla Gaines.

The connections indicated Gervinho will be pointed to the Breeders’ Cup Juvenile Turf.

“We’re going to look seriously at the Breeders’ Cup Juvenile Turf. That’s the hope,” said Brackpool. “The Juvenile Turf, if we can get in.”

Gervinho won with an eye-catching stretch burst after falling behind on the turn.

“When he was coming he slipped right away so I tried to get a hold of my horse, that’s why I lost a couple lengths. Once I saw the stretch I pulled him (out) and he came running. He showed me a big kick.”