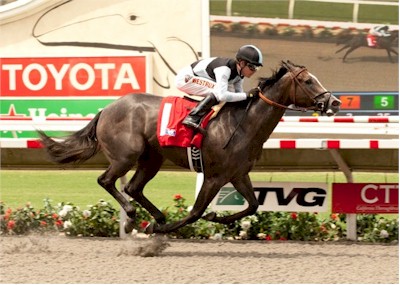 DEL MAR, CA (July 27, 2014)-Desert Steel, a juvenile filly by Desert Code, set a new track record in her winning effort going 56.76 to secure the win over a field of nine Cal-bred fillies. The filly broke alertly and was never headed in a hand ride while drawing off by an ever increasing five plus lengths.

Bred by Harris Farms, Desert Steel is out of the stakes producing Cozzene broodmare Lujien Lujien and the filly has a win and a second from her three starts with earnings of $62,920.

The filly was a $130,000 Barretts March Sale graduate consigned by Wavertree stables, agent; being knocked down for the stable of Alice Bamford, Eclipse Thoroughbred Partners and Michael House.