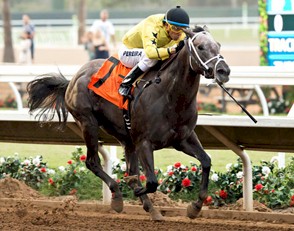 Obey, bred by Woodbridge Farm and Glen Road Racing, sped to a narrow advantage in the early stages of the five and one-half furlong sprint and doggedly retained her advantage through the stretch to defeat Later My Love by three-quarters of a length in 1:04.59. Later My Love, with Fernando Perez in the saddle, was five and one-quarter lengths ahead of third-place Just Google Me, with Ibelievewewillwin a distant fourth in the field of eleven fillies.

“We bought her last fall from the breeder,” said trainer Sam Scolamieri. “I saw her running out in the field and thought she could be something. She’s real mature for her age. She’s almost like a 3-year-old. Things just don’t matter. A lot of things bother young horses but nothing seems to bother her. Introduce something new and she acts like she’s been doing it for a long time. I knew she was fast, but I didn’t think she’d have this much speed. We’re going to see how things work out and maybe we’ll try it again. The Generous Portion ($150,000, Friday, August 28) is a possibility.”

Reckless Charm, the 5-2 favorite, was a disappointing sixth.

Tyler Baze was the riding star of the afternoon as he booted in three winners – True History in the third, Motown Men in the sixth and W. Giles in the eighth.