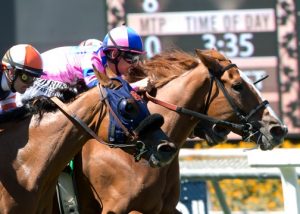 From SantaAnita.com
ARCADIA, Calif. (June 19, 2016)–With Mike Smith at the controls, California-bred Cheekaboo flew late and in a three-way blanket finish, got up to win Sunday’s Grade II, $200,000 Honeymoon Stakes by a head while covering 1 1/8 miles on turf in 1:46.86. On an unusually hot day that saw the thermometer hit 103 degrees at Santa Anita, Cheekaboo, who is by the aptly named Unusual Heat, took the final turf race of the 2016 Spring Meet, as construction on a new course will begin this evening.

With Gone to Bali carving out fast early splits, Cheekaboo settled nicely off the pace while saving ground at the rail. With three furlongs to go, she had two horses beat and Smith bided his time inside as the complexion of the race changed dramatically with a quarter mile to run.

“I followed Pete’s instructions,” said Smith. “…I saved all the ground that I could and I cut every corner and he told me to ‘go for broke’ and see if we could get lucky, get through, or in between. I knew I got up past the wire, but I was worried about at the wire. I was so busy, down riding, but I knew I was in front when I stood up. I just didn’t know if I got it right on the wire.

“I don’t know what it looked like, but it was fun as hell to ride. I kind of feel like, ‘Ok, now people can see I can ride a little bit. I can do more than just hang on to Songbird (with whom he won yesterday’s Grade II Summertime Oaks by 6 ½ lengths).”

“This is the last race on this turf course and I said ‘If she wins, I’m gonna go out there and take a piece of grass off the course and plant it in my backyard,” said co-owner Joe Ciaglia. “This is just a great Father’s Day gift, it’s really special.”

With Gone to Bali tiring a furlong out, Stays in Vegas, ridden by Alex Solis, took charge but was enveloped late by the winner and Be Mine, who both flew the final sixteenth.

“It’s tough to get beat a head, but I couldn’t change anything,” said Flavien Prat. “When she changed leads, she really took off and finished great.”

Stays in Vegas, who sat close to the pace throughout, looked as though she might hang on for the win, but had to settle for third money. Off as the narrow 3-1 favorite, she paid $3.60 to show.