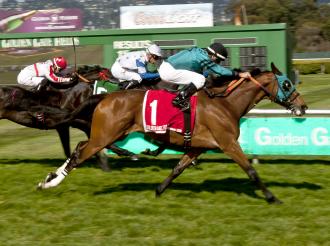 ALBANY, Calif. (May 14, 2016) – Central Heat continues her winning ways by taking the $50,000 Golden Poppy Stakes for fillies and mares at Golden Gate Fields for her seventh-in-a-row.

With a solid three wide effort Central Heat tenaciously fought on down the lane to win by a half a length and secured the winners share of $39,450.

“She’s just an outstanding mare,” Delia said. “Everybody is worried because she’s 7, but I’m not. She was amazing today and she was in a tough position most of the way. When Baze got her loose, she exploded. (Chocolatier) came back on her after we got the lead and she had to work hard. I was worried about the bounce because this was 20 days from her comeback race. She might have bounced a little bit, but she gutted it out. She keeps getting better and better. She wants to try every time and she trains like she wants to win all the time.”

Bred in California by Abrams, Huston Racing, Matties Racing and Auerbach she is out of the Smart Strike mare Miss Boomtown and is owned by William Delia or Dana Rocheford and is trained by Delia.