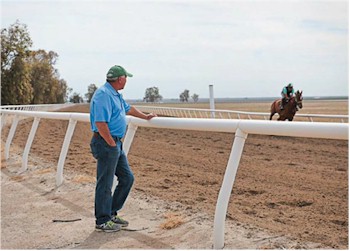 By Emily Shields/Photos by Lisa Torres
The adage “good help is hard to find” does not apply to Per Antonsen, trainer at Harris Farms in Coalinga for the last 36 years. He oversees the breaking, training, and rehab of all the horses coming out of the Harris program, which means he is the man who started such California-bred superstars as Tiznow and California Chrome. His wealth of knowledge is second to none, and his experience makes him an invaluable member of the team.

Antonsen hails from Denmark, where he served his apprenticeship as a jockey. “I rode in over one hundred races,” he said. He then immigrated to the United States to work at the famed El Peco Ranch, which was home to horses such as Hill Rise and J.O. Tobin. After nine years there Antonsen discovered that Harris Farms needed a trainer.

“I’ve been here ever since,” said Antonsen, who began training for John Harris’ sprawling operation in 1981. “At the time they were just getting started building the training barn and the new racetrack. I pretty much helped get the whole thing started and put up the new training barn. There were no more than 45 horses at the time.”

The farm now sports three training barns and keeps 50 horses in training year round, with many more at various California racetracks. 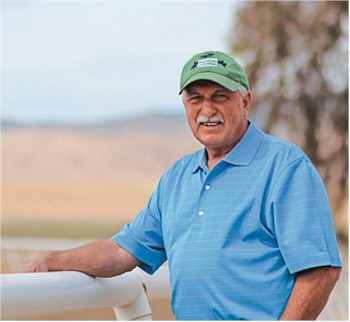 “I break close to 80 young horses every year,” Antonsen said, “and there are always about 25 layups getting ready to go back to the track at any time.”

He has a busy schedule, with training beginning at 5 in the morning, just as it would on the racetrack. 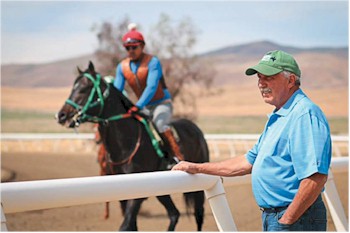 “The riders arrive at 6, and we do 10 sets of five horses each day. I like when the young horses go out together. They get used to training on both sides and learn all the basic things they need, like going inside and outside horses and switching leads. They learn breezing before they go to a real racetrack.”

Before a rider ever gets up, Antonsen starts the yearlings at around 18 months of age and, “depending on their disposition,” trains them for 45 to 60 days.

“I like a lot of groundwork,” he said, “such as driving with long reins. We introduce them to the racetrack in a little group with a jog and a slow canter, and then I turn them back out again to let them mature and grow up. That way, I get a little feeling about if they’re precocious or not. Those come back in around Christmastime. But we don’t push them; a horse will tell us if they’re ready or not.”

The two best horses to emerge from Antonsen’s training program were Cal-breds Tiznow and California Chrome. Hall of Famer Tiznow won the Breeders’ Cup Classic (G1) in both 2000 and 2001 en route to earning $6,427,830 while California Chrome took the Kentucky Derby (G1), Preakness Stakes (G1), and Dubai World Cup (G1) on his way to a staggering $14,752,650 in earnings.

“Tiznow was a pretty good guy to break in his young days— he didn’t give us too much trouble—and Chrome was always good,” said Antonsen. “He came in late November and stayed in training the whole time. He always seemed precocious and was just a very smart horse right from the beginning. He went around the racetrack the first day like he’d been there before. Tiznow was more kicked back, not quite that precocious early on, just a big old happy horse that turned out to be a heck of a racehorse.”

Antonsen’s favorite, however, is Unzip Me, a Cal-bred multiple stakes winner Antonsen owned in partnership with Harris, Martin Jones, and Donald Valpredo.